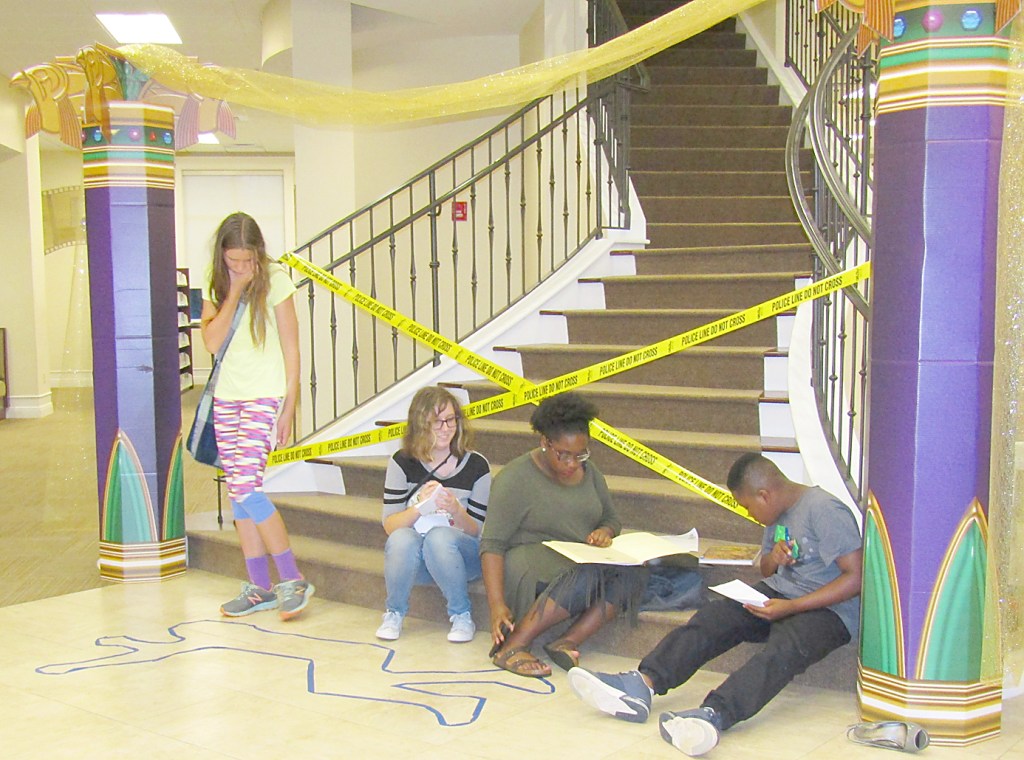 Messenger photo/Jaine Treadwell Tessa Suell, far left, solved the crime at the Troy Public Library’s Murder Mystery Lock-in Thursday. Tessa is a ninth grade student at Goshen High School. She enjoys reading and mysteries are near the top of her reading list. 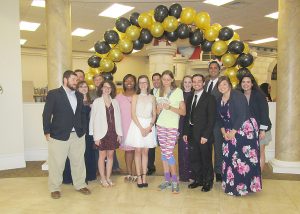 A female student was found injured and unconscious at the bottom of the staircase at the high school gymnasium. The victim was identified as Amara Fahdi, a senior who was crowned Queen of the Nile at the Junior-Senior Prom, No witnesses to Amara’s fall have been identified. Police are investigating the crime.

That was the scenario for the Murder Mystery Lock-in at the Troy Public Library Thursday. Young adult patrons of the TPL played detectives in the quest to solve the mystery.

“This was a very difficult case to solve and it really had the ‘detectives’ scrambling to find the clues needed to solve the crime,” said Teresa Colvin, TPL young adult librarian. “What they knew about Amara was that she was a senior at a private college prep school. She was very popular and extremely smart. She has been accepted at Yale to study pre-law.”

Students from the Baptist Campus Ministries at Troy University played the suspects and were interrogated by the ‘detectives’ who worked individually or in groups.

“This was a hard case to solve and, at first, I wasn’t sure it would be solved in the two-hour time frame,” Colvin said. “The first group to turn in their suspect was very close so I began to think that somebody might solve it.”

“Tessa Suell, who is 14 years old, worked alone and she solved the crime,” Colvin said. “She studied each clue and put everything together. She did an amazing job. She is a super sleuth.”

Tessa enjoys reading and is no stranger to mysteries. And she “usually does better” when she works by herself.

“I really studied the clues and there was one clue — a hieroglyphic note — that really made me think it was the mother of one of the students. When I put the clues together, they all pointed to her.”

“Sometimes, I can’t decide and other times I think ‘oh, this is what happened,’” she said. “It’s fun to try to solve mysteries.”

And, there’s some mystery yet to be solved. Tessa’s not “entirely sure” what she will do with the $50 prize money.

A total of 50 young adults participated in the Murder Mystery Lock-in at the Troy Public Library.

“Everyone had a blast,” Colvin said. “As the kids were leaving they said attempting to solve the mystery was fun but it was very hard. It really had them thinking. We had 20 young adults at the Escape Room event earlier. They were ‘locked’ in a room and couldn’t get out until they solved the mystery. Events like these are fun and they are great learning experiences. The Troy Public Library is for people of all ages and we’re here year around.”