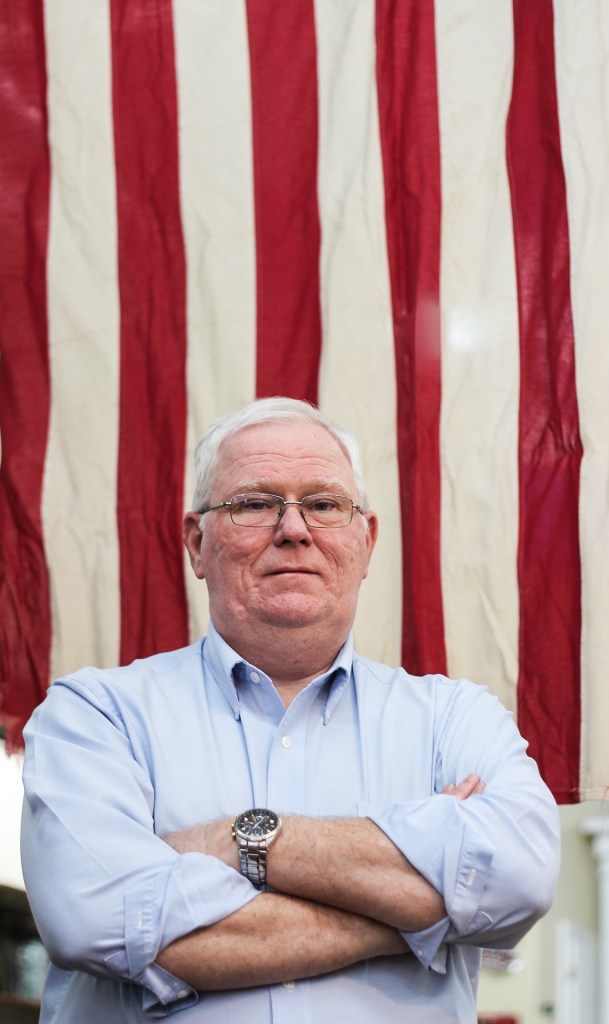 Scherr Qualls (above), owner of Douglas Brothers Jewelry on the Square, has had a love of flags ever since he was tasked with the care and display of the flags while deployed overseas. Qualls has collected numerous flags since then, mostly U.S. flags but also flags from Afghanistan, Kuwait, Alabama and Troy. Qualls now proudly displays the flags in his store. 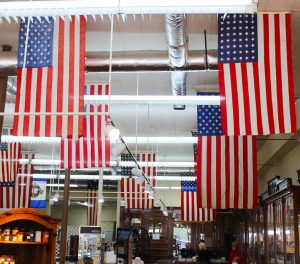 The Perkins and Parish tune about stars falling on Alabama has new meaning in a certain store on the Square in Troy. Veritable constellations hang from the high ceiling of Douglas Brothers Jewelry in the shapes of Old Glory and Star-Spangled Banners.

The display of US flags is the brainchild of Sherr Douglas Qualls, owner and operator of the store. By current count, there are a dozen Stars and Stripes, an Alabama state flag, a POW/MIA flag, and even a blue and white 1993 flag from the Troy City Sesquicentennial. There is also a long decorative banner in the US flag color scheme, and a “blue star” flag that flew in front of Qualls’ house marking his three deployments with the Army Reserves in Kuwait, Qatar and Afghanistan.

It was in connection with his duties as a Command Sergeant Major in his overseas deployments that established Qualls’ interest in the US flag. He was responsible for the care and display of the flags and “colors” for his unit. He saved and collected several flags from his time in Afghanistan and Kuwait. Back in the States after one of his mobilizations, he was at his grandniece’s wedding reception in Auburn when he saw a display of flags hanging in a private home and it gave him an idea.

In that first burst of activity, Qualls hung eight flags—one of which had 48 stars.

Most of the flags hanging from the ceiling in the store contain 50 stars, but three of them are 48-star flags. Qualls doesn’t really know their ages, but the 48-star flag was the standard for 47 years from 1912 to 1959. After the admission of Alaska and Hawaii as states, the current 50-star flag was adopted on July 4, 1960.

One of the older flags Qualls found at an antique store, another he purchased online and the third was donated to him by the owners of the antique store on the Square.

Qualls hung his first Stars and Stripes in the store in 2013. The flags have kept flying ever since. One of the flags yet to be set out in the store flew over the U.S. Capitol and was presented to Qualls by U.S. Representative Martha Roby in commemoration of the store’s 140th anniversary (Douglas Brothers first opened in Troy in 1871, started by Qualls’ great-grandfather. It has been in its current location since 1980).

The flags in Qualls’ collection range in size from something a person might see hanging from a neighbor’s porch on the Fourth of July to a huge Old Glory that is so big and long that Qualls has to tie up the end so that customers don’t bump into it with their heads.

“When you put it up on top of a pole they look smaller,” he said.

A few of the flags from Kuwait and Afghanistan look a little brownish and frayed along the edges. “The wind blows there a whole lot,” Qualls said, “and it tears up a flag—you can see they’re a little ragged on the ends. The wind tears them up and the dust gets them dirty.”

Qualls’ last deployment from 2011-2012 was at Camp Leatherneck in Helmut Province, Afghanistan. “The reason they look weathered is because they really are weathered,” Qualls said. “The wind blows constantly.”

One of the more unusual flag specimens is partially burned. Qualls found the flag rolled and stacked in a corner of a room in the Rock Building just off the Square. Several years ago, fire damaged the building, and Qualls was serving on a committee in an effort to save the iconic architectural structure when he noticed the flag. “We got it out of the building,” Qualls said, “and I volunteered to hang it here.”

On the other side of the store from the scorched flag is the Alabama state flag. Over seventy signatures highlight the flag and it is embroidered with his unit’s name and location from the Afghanistan deployment—the 375th Command Support Sustainment Battalion, Camp Leatherneck.

“When you’re deployed overseas,” Qualls explained, “you can write the governor’s office and they’ll send you a state flag.” He had the members of his outfit autograph the white field of the flag and had his niece do the embroidery. “It’s a piece of memorabilia for me.”

“I actually have more flags,” he said. “I just haven’t put them up.” His brother in Huntsville knew of Qualls’ interest in collecting flags and was an acquaintance of a collector there who had accumulated many older flags, but who didn’t want to destroy them and really didn’t know what to do with them. Those flags are now in Troy waiting to be unfurled.

The flag display is more than just decoration for Qualls. It is also more than just a hobby. Qualls would probably say that his display has something to do with duty, honor and country. After all, he spent 40 years serving in the Army Reserves as a logistics specialist. “Most of the people who stay in that long have a real strong feeling about the service they’re doing,” he said.

Considering as prominently as the many flags are exhibited and arranged, some customers to the store seem preoccupied and aren’t aware of them—quite literally, it’s all over their heads.

“I’ve had customers who have been here numerous times,” Qualls said, “and all of a sudden they’ll look up and say, ‘Oh, I love your flags—I never noticed them.’”

Douglas Brothers is a jewelry store after all. “Most people tend to look at the floor or the counters and they don’t really look up,” he said.

Qualls has been working in Douglas Brothers since he graduated high school in 1973 — he even worked there part-time while in school. He said that all his experience as a jeweler has been on-the-job training.   But while some people may only look down at the diamonds and pearls in the display cases, Qualls keeps looking up toward the stars (and stripes).