RACK ‘EM UP: Troy’s new APA pool league off to a fast start 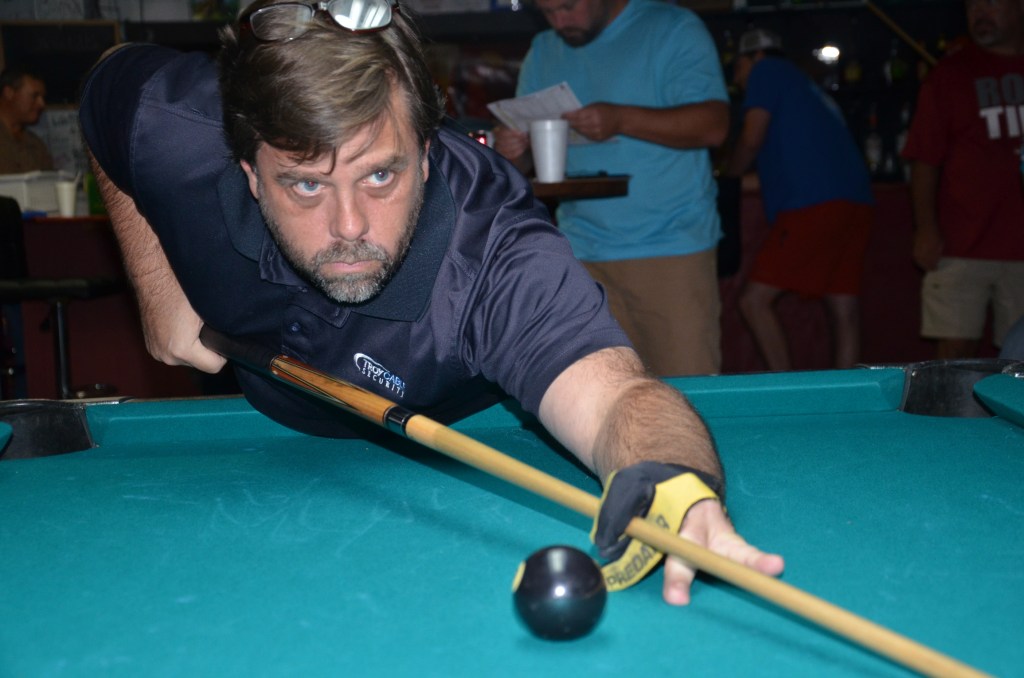 Scott Motes, above, is one of the particiaptns in the APA Pool League, which meets on Monday nights at the Double Branch in Troy. The amateur league features a cross-section of people from across the community. The APA Pool League Troy teams have from five to eight players on each of its eight teams. Only five members of each team play each on Monday nights at the Double Branch in Troy. Therefore, team members are not locked into a weekly commitment. Team captains are, front from left, Gregg Sprinkle, Jeff Cotton and Alex Adams, and in back, Brent Berry, Josh Baker, Eddie Cox and John Morgan.

The mere mention of the game of pool brings to mind a dark, smoky bar room with seedy looking men puffing on non-filtered cigarettes, drinking beer and gambling the night away.

But, that’s not the game of pool today. And that’s not the scene that describes the APA Pool League teams that “rack ’em up” at the Double Branch in Troy on Monday nights.

The American Poolplayers Association (APA) is the world’s largest amateur pool league and is comprised of men and women ages 19 and over from all walks of life.

On Monday night, a cross-section of pool players from the Pike County area filed into the Double Branch and made their way to the “pool hall.”

Danny “D.Z.” Zapata greeted each one, grinning like a Billy goat eating briars, not unlike the grin of a proud new papa.

Zapata helped give birth to the idea of an APA Pool League in Troy – an idea that is fruitful and multiplying.

“Several of us were playing in APA Pool Leagues in Dothan and Montgomery, and we got to thinking that we should have a league here in Troy instead of going out of town,” said Zapata, who agreed to check into the possibility of organizing a Troy pool league.

Beth Whittington, APA League operator for the local area, came to Troy and met with Zapata and Double Branch owner Nate Sneed, who agreed to allow APA Pool League play at the bar.

“To have a league, we had to have four teams of five to eight players each,” Zapata said. “On our first night, June 12, we had six teams. On June 26, we had eight teams.”

Zapata said Whittington was instrumental in the local league getting off to such a successful start.

“Beth told us what to do and how to do and then she helped us do it,” he said. “She was here Monday night to assist us in any way and to support and encourage us. We greatly appreciate all her efforts in helping get APA League Troy off and running.”

Whittington said the APA Pool League is proud to have a league in Troy and very excited about the interest and enthusiasm it has created.

“Pool is a great sport and a challenging sport,” Whittington said. “It’s a sport anybody can play. Men and women can play together and on a level playing field. Pool is a great way to have fun with friends while getting to know new people.”

“Our league is not like that,” he said. “Our most popular drink is Coke, followed by bottled water. Beer is a distant third. This is league play and we want to do our best and, too, we meet on Monday nights so we all have to get up the next morning and go to work.”

Pool is a social game and it’s played among friends.

“It’s men and women playing with and against each other,” Zapata said. “With the handicaps, it’s anybody’s game. Women are good at pool, anyway. They have good hand/eye coordination and they can make it tough on us. Play pool is challenging and fun and we all have a good time.”

Zapata said pool is also a good stress reliever, whether you’re playing or standing around watching.  “Before you know it, you’ll forget about the stress of your job and your problems in life,” he said. “You just get caught up in the game.”

And there’s also the economics of pool.

“In league play, it’s $8 a night,” Zapata said. “Where else can you go and be entertained for that?”

It’s man’s nature to be competitive and friendly competition is healthy. And, sometimes, it pays dividends. At the end of the APA League’s year, some lucky or highly skilled league teams will receive all-expenses paid trips to Las Vegas to participate in the national championships.

“And, we’ve got a chance,” Zapata said. “When you’ve got a prize like that sitting out there, that’s even more reason to play pool.”

Pool is geometry at its highest degree of precision. If you don’t believe that, ask a mathematician, the leaguers said.

The APA Pool League Troy meets at 6:30 p.m. on Mondays at the Double Branch in Troy. Interested players are invited.