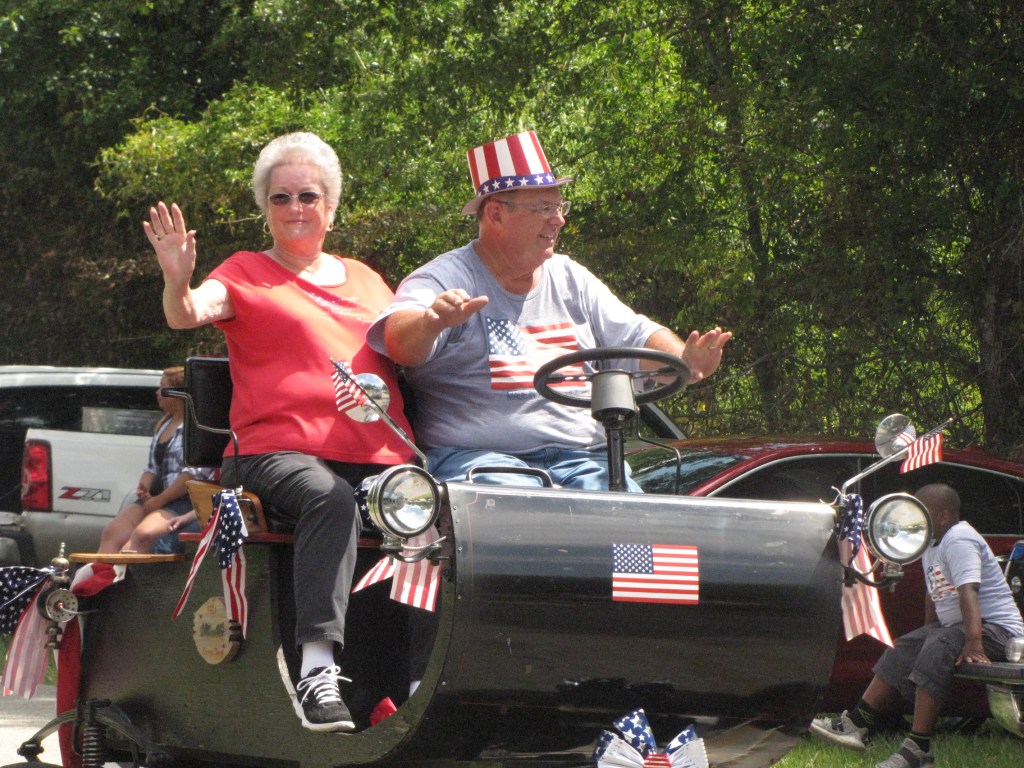 At the annual Meeksville parade “anything goes” including an oldsmobile from the early 20th century in last year’s parade. Cars, lawnmowers and even donkeys are welcomed entries in the parade.

Earnest Green, a member of the Meeksville Volunteer Fire Department, answered the question that so many are asking these days.

“Of course, it’s been going on a lot longer. China Grove had the Independence Day parade on the Fourth of July for 10 years. When they stopped having it, we didn’t want the parade to stop so the Meeksville Volunteer Fire Department took it on. We wanted to have a parade that honored our veterans and our country. And we wanted to do like they did in China Grove, let anybody that wanted to be in the parade be in the parade.”

Green said the parade is traditionally an “anything goes” parade.

“You can ride a car, a lawnmower or a donkey. You can be on a fancy float or walk your dog. Just anything that’s fun to do and fun to see.”

Those who would like to reserve a space in the parade may call Green at 372-0657.

“But we don’t want anybody to be left out, Green said. “Even if you don’t register, just come on and get in line. We welcome everybody.”

The Fourth of July Parade at Meeksville is set for 10 a.m. on Tuesday, July 4. “Line up is as soon as you get there.”

“The parade will lineup at the Meeksville fire house and go all the way down to Harmony Community Park where we’ll keep celebrating with food and entertainment, Green said.

The Meeksville VFD will have chicken and pork barbecue plates for sale and everyone is invited to stay around to eat and enjoy the entertainment and the fellowship of friends and neighbors.

“We have about 40 to 50 members of the fire department that support us and help us out from time to time,” he said. “It takes all of us.”

The barbecue at Harmony Community Park on the Fourth of July is the Meeksville VFD’s primary fundraiser. Green said the volunteer firefighters greatly appreciate the community’s support of the annual barbecue.

A grand marshal has not been named for the 2017 Fourth of July Parade at Meeksville but Green said there are several deserving nominees.

“As soon as we decide, we’ll let people know,” he said.