WORTH THE WAIT: Benjamin Smith turns a clunker into a classic 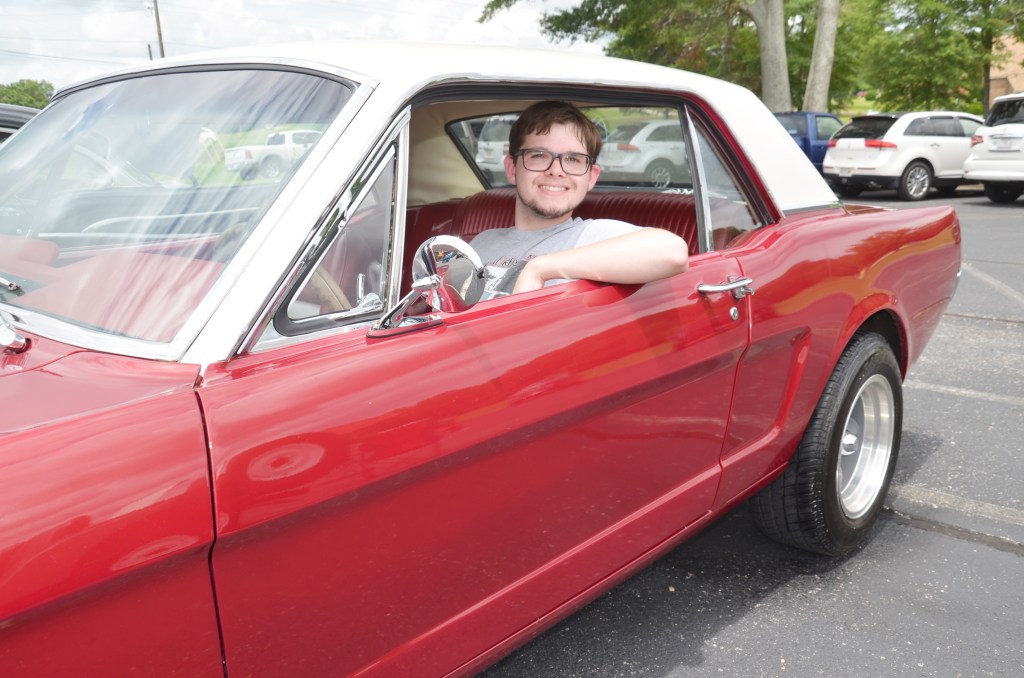 When Benjamin Smith, then 13, got his “new” mustang, it wasn’t much to look out. But after three years of hard labor and love, his restored classic turns heads everywhere he goes. Benjamin said the work was hard, but it was well worth it.

Anything worth having is worth working for…and waiting for.

Thirteen-year-old Benjamin Smith believes that – right down to the nuts and bolts of it.

Benjamin’s dad, Dr. Ben Smith, and his uncle, Dan Smith, were all cut from the same pattern and they too believe that things that come too easy don’t hold a great deal of significance. But those things that you dream of and hope for and work for and wait for are the things that mean the most.

That was why Dr. Ben decided that, when his son turned 16 years old and got behind the wheel of a car, that vehicle was going to mean something to him.

At first, Benjamin wasn’t exactly sure how that was to be.

But his dad had an idea that Benjamin bought into immediately.

Benjamin had always liked classic cars and the idea of getting an old fixer-upper and fixing her up just like new appealed to him. After all, it was three years before he could drive on his own and it was also the best way to own a classic without having to rob Fort Knox to get the money to buy one.

Benjamin did the research and in one classic car magazine he found just what he wanted – a 1965 Mustang.

Oh man, what a great car that was!

But the Mustang Pony that came to pasture at the Smith home didn’t look much like the one in the classic car magazine. It looked more like a vehicle that was rusting out in a roadside junkyard.

“But it ran … until we got it home,” Benjamin said with a smile. “Then we started taking it apart, one part at a time.”

Dr. Ben said he wanted Benjamin to know everything about the car – every nut, bolt and wire – and how it was put together and what made that Pony run.

Benjamin’s dad and uncle knew a little more about the mechanics of cars – what makes them go — than a lot of men because their dad, Moon Smith, knew a great deal about cars and how they ran. But because there is no room for error when putting a car back together piece by piece, they did the wise thing. They hit the books and listened and learned from those who knew cars.

“Ben and I knew how important it is for a young man to know how to handle wrenches, sockets, screwdrivers and all the basic tools,” said Dan Smith. “Taking the Mustang apart and putting it back together would be a good learning experience for Benjamin and was something that we could do together.”

Together, they pulled the engine out and stripped the car down to the bare bones.

Bare bones would have held more promise than the rusty, worn out body with more holes than a sieve.

The understanding among the “mechanics” a.k.a. the Smith Boys was that Benjamin had to be present and accounted for any time work was being done on the car. It had to be a hands-on, mindful project for him. His hands would handle the tools and his mind would tell him what to do with them.

Today, Benjamin’s has car show ribbons to show for all the hard work and dedication to restoring a Mustang that he said had been “rode hard.”

“Whoever had the car had tried to modify it,” he said. “There were wires running everywhere but that didn’t go anywhere. We had a lot of work to do.”

Some of the work was hard. Other work was tedious.

“The hardest thing was taking out the engine,” Benjamin said. “We worked and worked and couldn’t get it out. When my uncle, Dan, realized what was holding the engine in place, we felt rather stupid.”

Benjamin said he learned to use a lot of different tools and even more about how cars are assembled.

“Aligning the doors and the trunk pieces so that they fit together took a lot of time,” he said. “Putting in the headlights, everything had to be done just right. A lot of what we did was hard work. Sanding the paint off took a lot of time and it wasn’t easy work.”

Charlie Bundy did the engine work and Phil Oakes did the paint job. The car seats were ordered but Benjamin helped install them.

Even after the years of work, Benjamin doesn’t consider himself a mechanic, but he does have a good knowledge what makes at 1965 Mustang run.

“I’m excited about my car,” he said. “I worked hard on it and I prefer it over any other vehicle. It’s a piece of artwork.”

His Mustang has won several awards at local car shows and he enjoys participating in the shows and talking “shop” with other vintage car owners. But the greatest compliment comes when his 1965 Mustang turns heads on the road.

“People will honk their horns and give me a thumbs up,” he said. “That way I know they like my Mustang.”

Benjamin and his dad took a road trip along U.S. Route 66, also known as the Will Rogers Highway, one of the nation’s original highways.

“All along the route people would honk,” Benjamin said. “One time we stopped for gas. While we were filling up a man wanted to look under the hood. Some guy asked if that was a gas station or a car show, and I said, ‘yes, a car show.”

Young Benjamin Smith has reason to be proud. His Mustang was made from scratch.