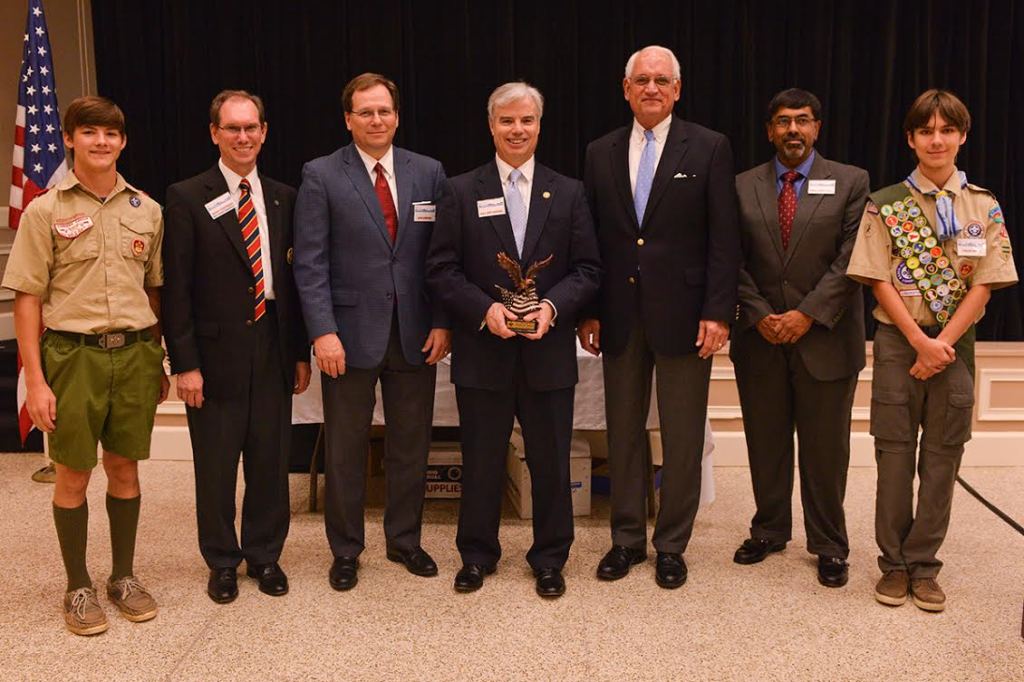 Retired Air Force Maj. Gen. Walter D. Givhan, Troy University’s senior vice chancellor for advancement and economic development, may have been an “Eagle Driver” back in his days flying F-15’s and A-10’s in the Air Force, but he was made a “Golden Eagle” Thursday, June 22 by the Alabama Florida Council of the Boy Scouts of America.

Honored by the Scout Council during its annual Golden Eagle Dinner, Givhan was recognized for his outstanding leadership and dedication to the community and its youth.

“General Givhan’s commitment to our nation’s security and to the education of youth and adults makes him a great role model for all our Scouts,” said Jerry Freyberg, the Council’s Scout executive. “We are pleased to honor him for his service to all of us.”

Presented the award by dinner chairman Sohail Agboatwala, Givhan provided brief remarks about the important relationship between Scouting’s mission and the American military.

“The qualities of courage, skill, resourcefulness, and leadership one finds in military scouts are the same qualities Boy Scouts value and exemplify.  These are the qualities that put them out front and prepare them to be the leaders we need,” said Givhan.

“I see those qualities in you, and I salute you, your leaders, your families and this community for supporting Scouting.  Let us all aspire to the ideals of Scouting as we go forward and do our duty to make this country great.”

Scouts from Troy’s Troop 41, and from around the council presented colors and provided the opening ceremony, while Troop 41 Life Scout Colin Jones served as master of ceremonies. Jeff Kervin served as chair of the dinner’s steering committee.

A native of Safford, Ala., Givhan earned a master’s degree from TROY and retired from the Air Force in 2014, serving as vice commander of Air University at Maxwell Air Force Base. There, he oversaw all of the Air Force’s higher education (except the Air Force Academy), including the Community College of the Air Force – the world’s largest community college system. He has also served as commandant of the Air Force Institute of Technology, the Air Force’s graduate school of engineering and management, and its technical professional continuing education arm. Additionally, he served as deputy assistant secretary of state in charge of U.S. global assistance programs. He joined the Air Force in 1981 and is a command pilot and flight instructor with more than 2,500 flying hours and served in Operations Desert Shield,  Desert Storm, and Enduring Freedom. He’s a life member of the Council on Foreign Relations.

At TROY, Givhan leads development and outreach efforts, including fundraising, sponsored programs, governmental relations and marketing and communication. In addition, he leads the University’s efforts at promoting economic development across the state and region.