Harden to be recognized for church service 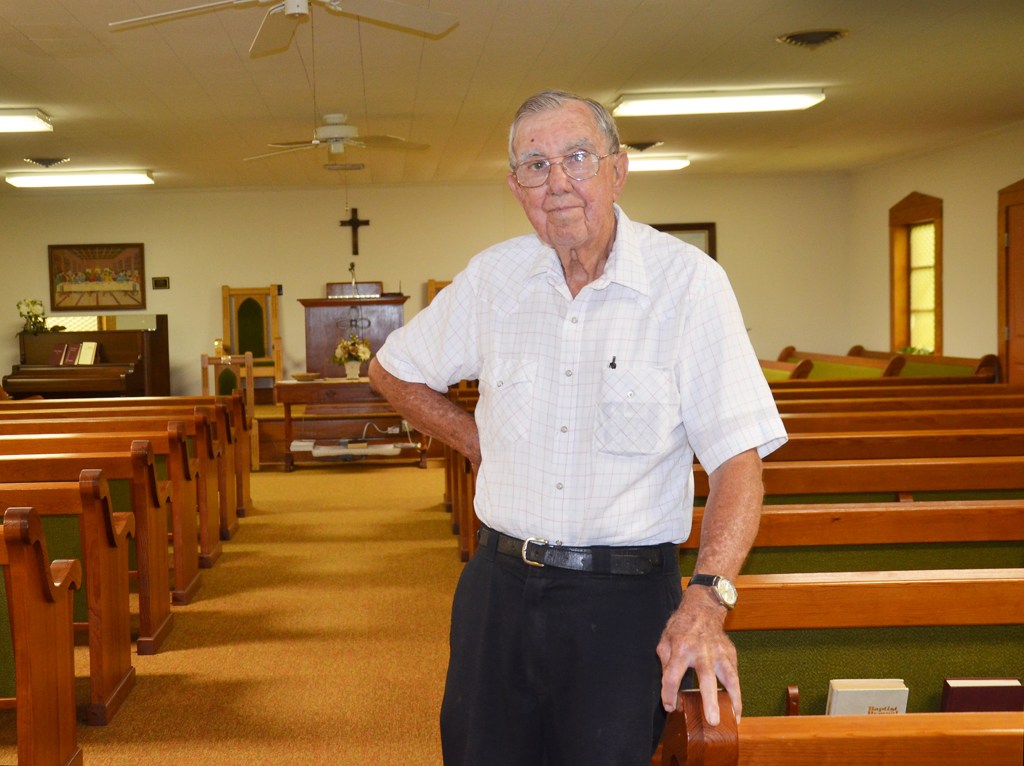 John Harden walked the aisle of Ramah Primitive Baptist Church in 1941. Sunday, he’ll be honored for his many years of service in the church.

On the fourth Sunday in June 76 years ago, 11 year old John Harden walked down the aisle of Ramah Primitive Baptist Church and gave his life to Christ.

On Sunday, the membership of the church will recognize and honor Pastor John Harden for his many years of dedicated service to his church and to his God.

Harden said he had not planned to make a public profession of faith on that fourth Sunday in June 1941 but he found himself on his feet and walking toward the altar.

“I always enjoyed sitting around listening to the old people talk,” Harden said. “They talked about many different things — often their faith and what God had done in their lives. Hearing them talk lifted me up.”

Traditionally, on the Fourth Sunday in June, Ramah Primitive Baptist Church in the Josie community held a communion service of bread and wine and also a foot washing service.

But Harden said there was something special about that Fourth Sunday in June 1941.

“I just had a different feeling at that service,” Harden said. “I had no idea that I was going to make a commitment until I was walking down the aisle and scared slam to death.”

Back then, children as young as Harden didn’t often make that kind of public commitment of faith so it was unusual for an 11-year-old to be baptized into the membership of Ramah Primitive Baptist Church. Young people were usually in their late teens before they offered prayers in church, Harden said.

Members of Primitive Baptist churches didn’t dance or drink and Harden made that commitment at an early age and never desired to do any of the things his church marked as sinful.

“I just didn’t care about those things,” he said. “The church had strict rules of conduct and any form of misconduct, including non-attendance, could be brought before the church.”

Over the years, there was a somewhat loosening of the rules of conduct at Ramah.

When Gilbert Walker became pastor of the church, he was not nearly as strict and more young people began going to church there.

“The Baptist church up the road at Enon had a preacher but he was a weekend preacher,” Harden said. “Soon Pastor Walker assumed the role of pastor for the entire Josie community. He drove the school bus; he married couples; he buried the dead. Pastor Walker was the pastor for all of us.”

Harden has fond memories of his childhood church — of the church house with no lights and the frame building with a long hall. He remembers the wood burning heaters that provided heat on cold winter Sundays and “church fans” that were elbow powered to move the air on hot, during hot, summer services. He remembers going to singing school to learn to sing by the shapes of the notes in the songbook.

“My brother, J.C., was 24 years old when I was born, and he loved shape note singing,” Harden said. “He encouraged me and I enjoyed shape note singing. But what I really enjoyed, and still do, is four-part harmony. For many years, musical instruments were not allowed in Primitive Baptist churches. We sang harmony and I love that.”

Harden said Ramah Primitive Baptist Church now has a piano and he enjoys singing with it but “there’s nothing as pretty as four-part harmony.”

Perhaps, the congregation will be invited to join Harden in singing in four-part harmony when he is honored for his long and dedicated service to Ramah Primitive Baptist Church at the 11 a.m. service on Sunday.

When Harden made that long walk to the altar 76 years ago, he did so with no thoughts of ever being pastor of his church. But when God called him, he “got up and went.”

Pastor John Harden is still answering God’s call. He is honoring that commitment he made 76 years ago. For Harden that long walk to the altar was the beginning of a journey of a lifetime of service to his church and to his God