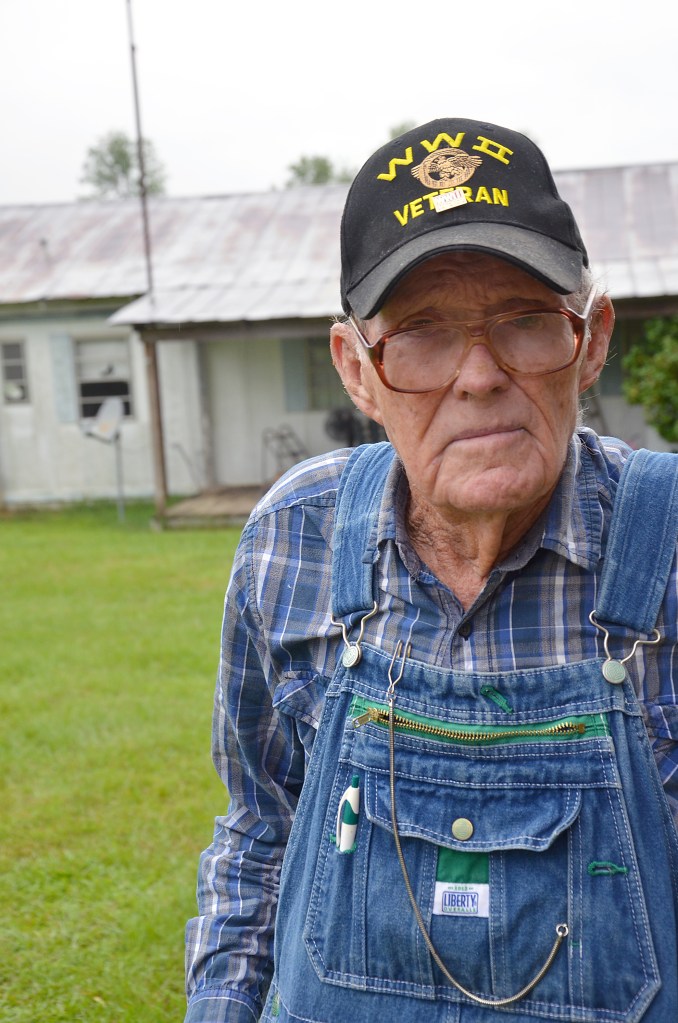 World War II veteran Max Thrash will be honored as the Grand Marshal of the Independence Day Parade at 9 a.m. Saturday in Brundidge. Thrash received a Purple Heart for the injuries he received during the Invasion of Normandy. Thrash is a true patriot. He flies the American Flag at his home each day to honor America and its veterans of all wars.

The rain had stopped.

Max Thrash struggled to snap the bent flagpole. He then placed the American Flag in its bracket.

Thrash, a World War II veteran, honors his country every day by flying the American Flag at his home in the Tennille Community.  He would fly the flag at night, except he has no way to shine light upon it.

At age 96, Thrash’s heart still beats with the same patriotic passion that it did when he was a 20-year-old soldier lying wounded on Normandy beach with mortar shells exploding all around him, too afraid to even pray.

“But I’d leave again tomorrow, if I had to,” he said. “A man would be a fool not to fight for his country.”

Thrash will be honored for his service to his country as the Grand Marshal of the 2017 Independence Day Parade in Brundidge on Saturday.

He has ridden in the annual “Fourth of July” parade several times but this time will be special. He will ride to represent the “Greatest Generation” whose numbers are dwindling at a rapid rate. There were 16,112,566 members of the United States Armed Forces during WWII. As of 2016, an estimated 620,000 American veterans from the war were

Thrash knows that his life could have ended on battlefields in some far away lands. Perhaps, he accepted that, even when he was seated in a theater in Bibb City near Columbus, Georgia on December 7, 1941.

“At the picture show, they announced that Pearl Harbor had been bombed and instructed all soldiers to return to base,” Thrash said. “I was working at Swift Cotton Mill but I went in Monday morning and turned in my time.”

Thrash realized that it was only a matter of time before he was “called up.” He came back home to Pike County to work on the farm until Uncle Sam needed him.

“I got the last of the peanuts in around lunchtime on Saturday and I was on my way to the Army Monday morning,” he said. “Hobo Ray, Rip Ray and Lenny Ellis were on the bus with me. I didn’t get to come back home for three years.”

Thrash was trained as a cook but he could shoot better than the other soldiers so he eventually became a number one machine gunner with the Army’s 1st Infantry Division Big Red One.

“The number one machine gunner is the soldier that pulls the trigger,” he said.

Thrash was among the Allied fighting forces during the invasion of Sicily.

“We fought all the way across Sicily,” he said. “One time we got pinned down on Castle Hill No. 1 for four days before we were able to take ’em.”

The fighting in Sicily was fierce and the causalities far too many but Thrash could not begin to envision what was ahead on D-Day on the beaches of Normandy.

He had never heard of Normandy but it’s a name he’ll never forget.

“The troop ships were way out in the channel and we got on landing crafts to go hit the beaches,” Thrash said. “On the way in, it was ‘Zoom! Zoom! Zoom!’ mortar shells were exploding all around us. When we landed, I took off running. But my right foot was still in the water when a mortar shell hit me in my left ankle. I laid on the beach for a long time before I saw a medic and crawled to him.”

The medic did what he could for Thrash but he could not ease the pain of the death he was seeing on the beach.

“You could have walked 10 miles on dead bodies,” Thrash said. “I can’t ever get rid of the sight.”

Thrash was put on a small boat taking injured soldiers to the hospital ship but the craft was hit by mortar shells and capsized.

“All I could do was try to swim back to the beach,” he said. “It was a long, hard swim and I thought I wouldn’t make it. Then, I saw a piling sticking up out of the water. I reached for a copper wire hanging from the piling but before I grabbed it, I saw a mortar shell on top. I would have blown myself up if I had pulled on that wire.”

With God’s help, Thrash made it back to the beach but was again hit by a shell, this time in the left hip.

“I didn’t think I would make it out of there,” he said. “But prayer got me out and back home.”

Thrash knows that he was a lucky and blessed man. He fought his way through many battles, pulling the trigger of his machine gun, not knowing what marks those shells hit. He saw many men die and he looked death in the face himself.

“I don’t know how the enemy got to me and put a barrel in my face,” he said. The first machine gunner carries a pistol and somehow I pulled my pistol and shot before he did. But I saw his face.”

And it’s that face that Thrash sometimes sees in what he calls nightmares.

Thankfully, the nightmares don’t come that often, he said. But every day, he experiences a sense of pride in having served his country and gives thanks for the opportunity to live in America, “the home of the brave and the land of the free.”