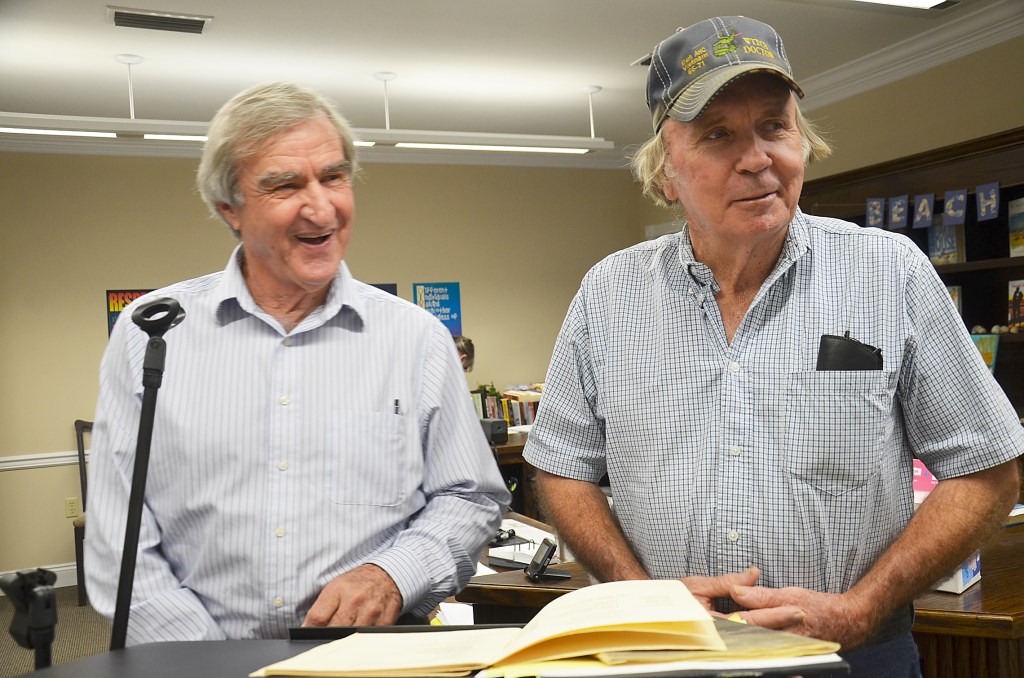 Poetry shouldn’t be that much fun. Larry McLeod of Brundidge and Ed Hicks of Troy are long and fast friends. Poetry binds them. McLeod, seated, and Hicks were the guest speakers at the Brown Bag Lunch event at the Tupper Lightfoot Memorial Library in Brundidge Tuesday.

Although Larry McLeod was quick to join in discussions about philosophy, history, politics and other deep and often time controversial subjects, he did not think his vocabulary was extensive enough to write poetry. Not until Ed Hicks reminded him that Robert Frost did not use big words.

McLeod and Hicks, the unofficial but uncontested poet laureates of Pike County, were the program guests at the Brown Bag Lunch event at the Tupper Lightfoot Memorial Library Tuesday.

McLeod and Hicks are former educators, McLeod on the high school level and Hicks in college. Both are passionate about poetry.

McLeod said, other than a couple of Army buddies and a few others, Hicks is his closest friend. Poetry is the tie that binds their friendship.

“For years, I have been trying to find the center of human consciousness,” McLeod said, adding that his search has led him to words and what words can do.

“Words carry more meaning than I could ever imagine,” he said. “The words, the rhythm of the speaker’s voice – have the power, the human element to communicate. Words tap into the unconsciousness and bring you to the present.”

McLeod said his attempts at putting his feelings into words, into some poetic form, often leave him void.

“Ed has to tell me what I said,” McLeod said, laughing. “Poetry poses more big questions for me than science. The mind is an amazing and frightening place. My thoughts and feelings frighten me at times but these thoughts, these feelings, I can express in a poem.”

“Fern Hill,” which McLeod said Hicks will read at his funeral, was an emotional read for McLeod. “That is poetry at its best.”

“‘That is no country for old men. An aged man is but a paltry thing,’” McLeod said. “A

‘paltry’ thing? Where else would you find that except in poetry? And Emily Dickinson? ‘A wounded deer leaps highest.’ That is poetry. Poetry is what words can do and there is no writing that can do what poetry can do.”

Hicks echoed the same sentiments about poetry as his friend.

He read “The Emperor of Ice-Cream” by Wallace Stevens, which he said is all about living in world of melting circumstances.

“Time is that circumstance,” he said. “Matthew Arnold’s ‘Dover Beach’ locks us in a place where there is no past or present. Only poetry can do that.”

He read “After Apple Picking” by Robert Frost, which makes such a simple but laborious task, seem like a solemn and spiritual ritual.