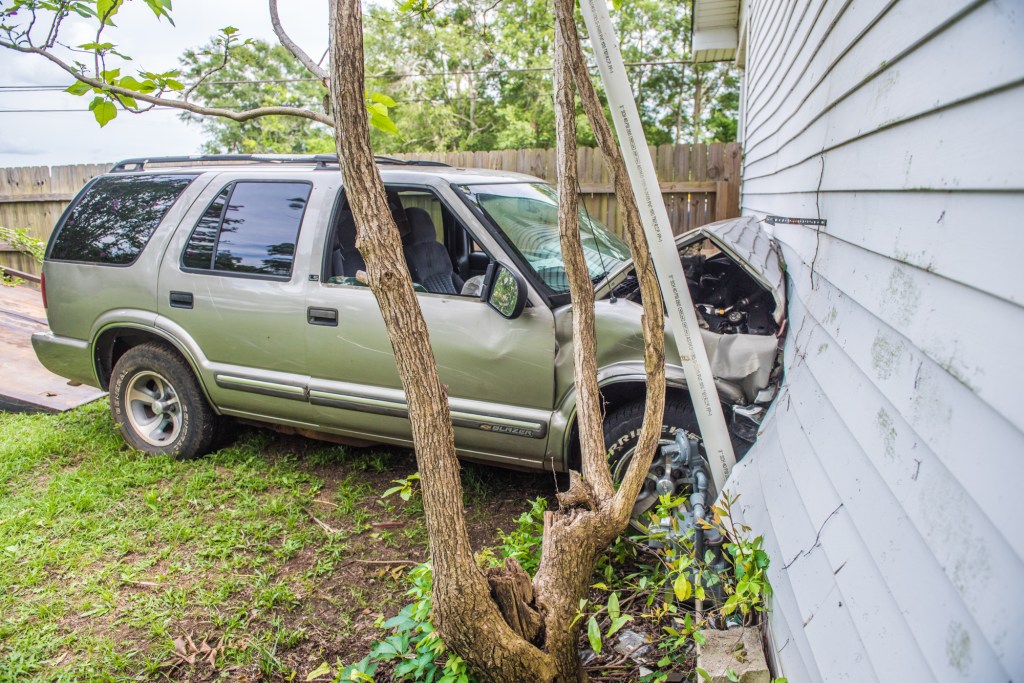 Messenger photo/Jonah Enfinger A vehicle crashed into a house on 3 Notch Street Monday, totaling the vehicle and causing damage to the home. The driver was transported from the scene with non-life-threatening injuries.

Sue McLendon was in her bathroom when she heard a loud boom and items flew from her wall and shattered.

“My first thought was that a pecan tree had fallen on the roof,” McLendon said.

Instead, McLendon ran outside to see a vehicle rammed into the side of her house on 3 Notch Street, with a woman slumped over at the wheel.

“As soon as I saw that I was just praying for her that she would live,” McLendon said.

The accident took place around 2:25 p.m. on Monday. The driver apparently lost control of her 1997 Chevy Blazer and hit the side of the McLendons’ home.

The Troy Police Department did not release the name of the driver, but Police Chief Randall Barr said she was transported from the scene by Haynes with non-life-threatening injuries.

Next-door neighbor James Till shared what happened from his view.

“She had pulled up in my yard to talk to me and then she suddenly sped off right through my bushes,” Till said. “It’s a wonder she didn’t flip the car. She took off and then I heard a loud ‘Blam!’ and I ran over right away.”

According to Till, the car traveled through a line of bushes separating his home from the McLendons’ and into the house. “That’s something I don’t want to be a witness to ever again,” he said.

McLendon said she was still shaken by the accident and that her bedroom was destroyed. “It’s all torn up,” she said. “Everything in there is shattered.”

Both McLendon and the driver may have caught a lucky break though, she said, as she pointed out how close the vehicle came to hitting a gas pipe.

McLendon was not injured in the accident.