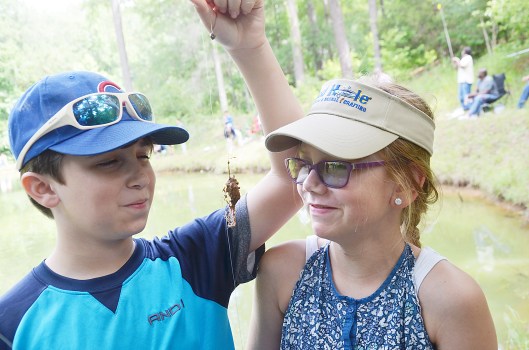 Pike County Kids’ Fishing Day was held Saturday at Clay Hill Farms with 87 anglers participating. Above: Braden and Savannah Norris disagreed on the effectiveness of stinkbait. 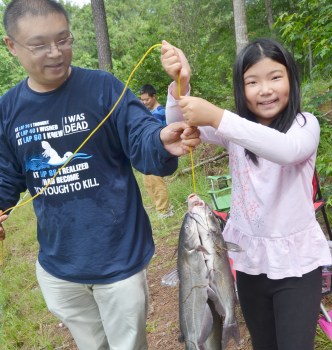 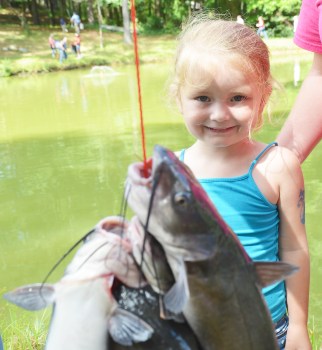 Saturday was a good fishing day at Clay Hill Farms.

Eighty-seven anglers caught 178 catfish with a total weight of 338 pounds and 15 ounces, making it the biggest Pike County Kids’ Fishing Day in the 10 years that John and Carol Dorrill have hosted the event at their farm near Pronto, said Jerry Jinright, Pike County Conservation Enforcement Officer.

Families from all around Pike County took advantage of the free Pike County Kids’ Fishing Day and just about as many girls put corks in the water as boys.

And it was Ashley Teal who landed the biggest cat of the day, a whopping 5 pound and 7 ounce “tugger.” Ashley won the tug of war with the big fish and will have a tale to tell about the big one that didn’t get away.

Ashley said Kids’ Fishing Day was not her first time putting worms in the water but the five pound cat was her “trophy” catch, so far.

“I like to fish. My church, God’s Way, goes fishing and I always like to go,” she said. “Today was really fun and I was excited to catch the biggest fish. I didn’t even think I would.”

Like all good anglers, Ashley was mum about the kind of bait she used to catch the big catfish.

Fishing was good all around the Dorrills’ pond which is well stocked with catfish year around but had an added 200 eating-size cats for Pike County Kids’ Fishing Day.

Jerry Jinright, Pike County Conservation Officer, said not every kid caught a stringer of fish but every kid was a winner.

“Every kid had an opportunity to win a prize in a drawing and we had some great outdoor prizes including rods and reels, tackle boxes, cricket boxes, even turkey calls,” Jinright said. “The Conservation Officers Association provided the prizes for the drawing and every kid got a prize.”

Walmart provided two $50 gift certificates toward the purchase of bicycles at the Troy location and also provide a hotdog lunch for the participating families.

In addition to Walmart Alabama and the Conservation Enforcement Officers Association, sponsors of the 2017 Pike County Kids’ Fishing Day were the Alabama TREASURE Forest Association, the Alabama Wildlife and Freshwater Fisheries Division and the Federal Sport Fish Restoration Program.

The Farm-City Committee of the Pike County Chamber of Commerce assisted with preparations and management of the event.

On behalf of all the kids that participated in Pike County Kids’ Fishing Day, Jinright expressed appreciation to the Dorrills for their hospitality, to all of those who supported and contributed to the event and those who volunteered their services.

“We want to especially thank the parents, the families, that took the time to take their kids fishing,” he said.