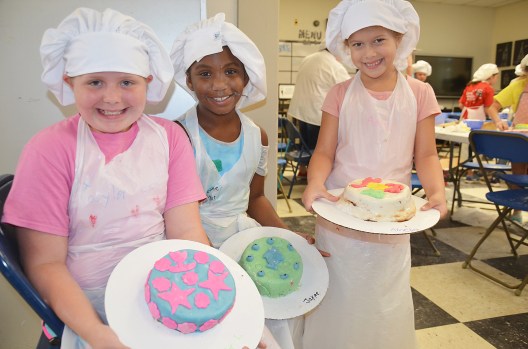 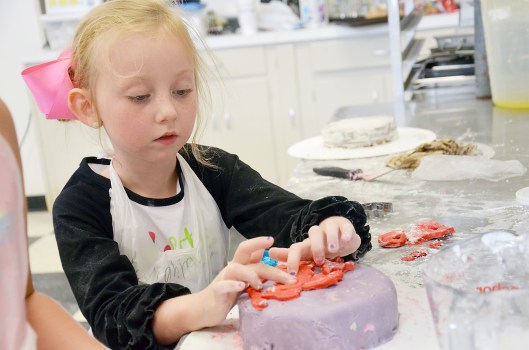 Juju Kinght works carefully on the decorations for her cake.

What was Paula Shute thinking?

Shute, laughingly, said she was thinking about how much she loves cooking and little girls and how much little girls love cooking. But 31 little girls made for a busy, busy kitchen.

“We’ll have another session of the Summer Cooking Camp the third week in July but the limit will be 20,” Shute said. “We had 31 for our first camp because I just could not turn anyone down.”

This was the first summer the Culinary Arts Academy at Charles Henderson High School has offered a cooking camp for kids. Measuring by the cake and icing on the floor and the miles of smiles, the camp was a great success.

“The Summer Cooking Camp was offered to kids throughout the county and the response was tremendous,” she said. “We had kids from all around the county and they enjoyed getting to know each other. Little girls always like to make new friends.”

The weeklong cooking camp was from 8 until 11:30 a.m. Monday through Friday. The $45 cost of the camp included the ingredients for a variety of baked good, as well as the opportunity to scrap the bowls.

“I wanted to give the girls a variety of cooking experiences, as well as opportunities to work together,” Shute said. “The age difference was a plus. When the older girls finished ‘cooking,’ they helped the younger girls. They enjoyed working together and that was a good learning experience.”

The first learning experience for all the cooking projects was to learn to read recipes.

“The cooking camp was all hands on,” Shute said. “And we did our baking from scratch, no ‘boxing,’ so they learned how important it is to read the recipes and then follow them to the letter.”

Cookies were baked and then decorated with icing – lots and lots of sticky, gooey icing.

They had great fun dipping marshmallows in caramel and then rolling them in Rice Krispies.

Dipping and rolling was a lot of sticky fun and so was baking and icing cupcakes. But the biggest kitchen challenge was decorating cakes.

Decorating a cake takes more planning than is needed for cupcakes and cookies. The cake has a top and sides and the girls wanted to decorate both.

Some girls used cutters from a Play-Doh set to cut shapes for their cakes. Other used their imaginations and some imagined interesting shapes.

When all was said and done, the girls learned something about a thing call kitchen cleanup.