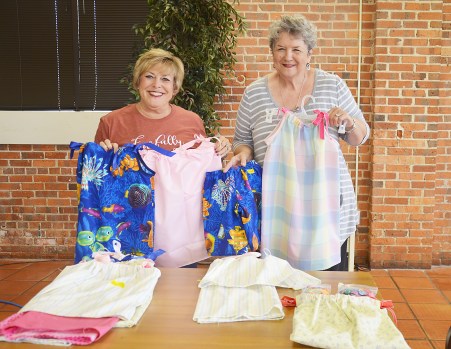 Cornelia Graham and Dunkin display some of the outfits sewn this week by the volunteers.

An idea that originated in the Lydia Sunday School Class at First Baptist Church in Troy has become an intergenerational endeavor that will bring smiles to young faces in Central America.

Millette Dunkin had the idea of making pillowcase dresses for young girls in Costa Rica as an extension of the church’s mission program. The idea for such a project had also crossed Cornelia Graham’s mind.

When Dunkin presented the idea to the class, members began to put “the pedal” to the idea.

First Baptist Church has about 28 missions that it supports and the Women’s Ministry is actively involved in the mission program. The women were eager to lend a sewing hand in making dresses for little girls and shorts for little boys in Costa Rica.

When the invitation was extended to anyone who wanted to participate by sewing, cutting out patterns, ironing or go-fetching, the response was “intergenerational.”

“We’ve had people of all ages join us,” said Frances Davis of the Women’s Ministry. “Thursday, we had children to come and people in their seventies or more. We also gathered up material and took it to those who wanted be a part of the ministry but could not come to the fellowship hall, so they sewed at home.”

Dunkin, who is heading up the project for the Lydia class, said First Baptist Church is a mission-minded church and children are at the heart of that mission.

The church plans two mission trips, one in the summer and one at Christmastime.

“The weather is always warm in Costa Rica so the dresses that are being made can be worn year around as well as the shorts,” Dunkin said.

Jose and Leda Villalta are missionaries to Costa Rica and First Baptist supports their ministry in different ways including sending mission teams to their Barranca Ministry.

Dunkin said the hope was to have 30 items to for the children of Costa Rica, but the response has been such that, perhaps, that number will be even greater.

If so, the First Baptist Church mission team to Costa Rica in July will have gifts to present to the little ones at the Villaltas’ mission site.