‘People were laughing … then crying’ 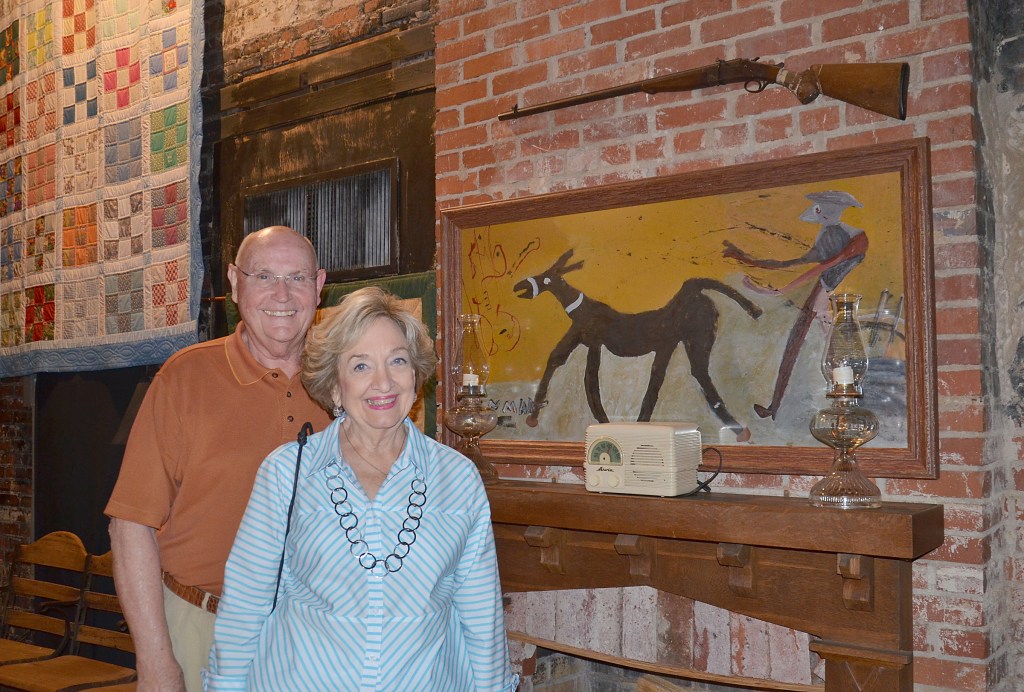 Mack and Mary Gibson were the special guests of the Brundidge Historical Society this weekend. The couple gifted this Charlie Lucas original artwork to the BHS.

Nationally acclaimed storyteller Barbara McBride-Smith brought the We Piddle Around Theater audience to its collective feet Friday night. The extended standing ovation was well deserved, said Joe Faulk of Troy, who, along with his wife, Peggy, is a familiar face at storytelling events at the Brundidge folk life theater.

Mack and Mary Gibson of Troy were the special guests of the Brundidge Historical Society at the closing performance of the 2017 June Buggin’ storytelling event.

The Gibsons recently gifted the BHS with an original painting by internationally recognized folk artist Charlie Lucas of Selma and Pink Lily.

The painting titled “Man Plowing with Mule” was a part of the Johnson Center for the Arts’ permanent collection.

With the permission of Lucas and the JCA, the image of a man plowing behind a straight-tailed mule and the tag: “Everybody’s Got a Tale” became the logo for the Pike Piddlers Storytelling Festival in 2002.

In 2017, the Gibsons purchased the original painting from the JCA and donated it to the Brundidge Historical Society.

“The Pike Piddlers Storytelling Festival is a magnificent event, not just for Brundidge and Troy but for all Pike County – all Alabama,” Gibson said. “Charlie’s painting is a perfect logo for the storytelling festival. Folk art always has a story and there’s a story behind ‘Man Plowing with Mule.’”

Folk art and storytelling go hand in hand,” he said.

“Mary and I know something of all the hard work, dedication and commitment that have gone into the Pike Piddlers Storytelling Festival and the We Piddle Around Theater. For years, Charlie’s painting has been the logo for the storytelling festival that is so well known and brings people from way beyond the borders of Alabama to Pike County.”

Gibson said purchasing the painting for the BHS was a way of saying “thank you” to the BHS for realizing the value of the arts in improving the quality of life for people of all ages in music, theater, dance, art and “yes, storytelling.”

“Mary and I realized that the We Piddle Around Theater would be a better home for Charlie’s painting,” Gibson said. “It means more being there than anywhere else.”