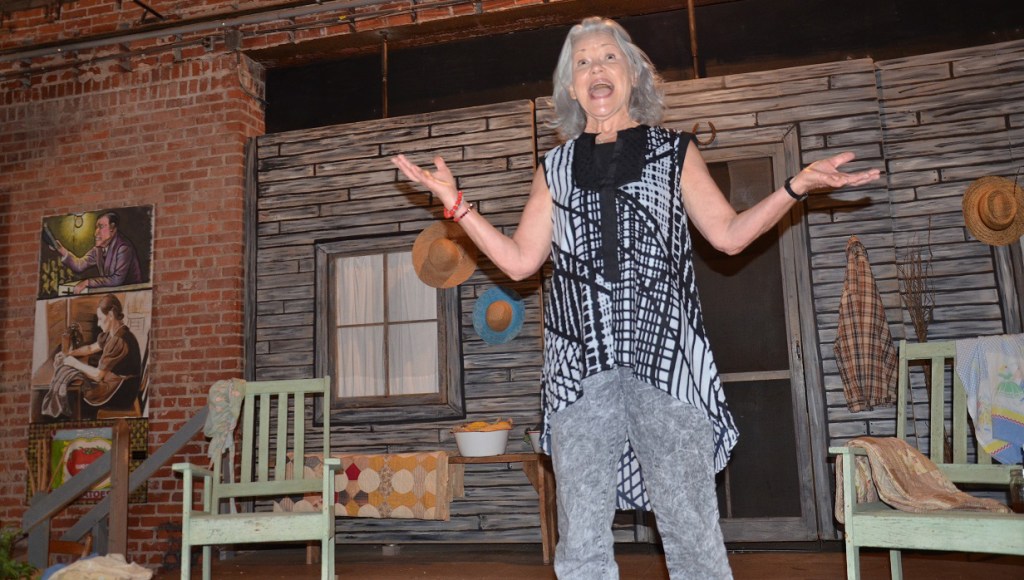 Barbara McBride-Smith speaks to the Ladies Only Day crowd, the first of two June Buggin’ events.

Thursday was Ladies Only day at the We Piddle Around Theater in Brundidge. And for good reason. Texan storyteller Barbara McBride-Smith told stories that only women could fully appreciate. Her stories were told in true Texas fashion and tickled the ladies’ funny bones and warmed their hearts.

For McBride-Smith, coming to the We Piddle Around Theater is a homecoming of sorts.

“Brundidge feels like home,” McBride-Smith said. “The people here seem like family and I always look forward to coming back. The We Piddle Around Theater is the most unique storytelling venue that I have ever performed in. It’s exactly right for storytelling. It’s comfortable; it’s cozy; it’s perfect.

“The audience was wonderful. You know a community has its heart in the right place when it supports the arts in the right away.”

McBride Smith travels the country over telling stories and promoting the art of storytelling. She has been a featured teller at the National Storytelling Festival in Jonesborough, Tennessee 13 times. And that’s no small potatoes, said Mernette Bray a member of the sponsoring Brundidge Historical Society’s storytelling committee,

“When you go to Jonesborough, there are a handful of storytellers that you’ve just got to hear and Barbara McBride-Smith is one of them,” she said.

It only took hearing McBride-Smith one time for Bray to know that the Texas teller would be one to carry the storytelling torch into Pike County.

“Barbara has been a featured teller at both our June Buggin’ and Pike Piddlers Storytelling Festival events,” Bray said. “We’ll keep asking her back and hope she’ll keep coming back.”

Sara Warren of Enterprise is a fan of the We Piddle Around Theater and a big fan of storytelling. McBride-Smith is one of her favorite tellers and Warren said hearing her was well worth the drive.

“Thursday was such a treat and June Buggin’ was such an enjoyable event,” Warren said. “We laughed and we had a few tears to come. You can always count on a great performance at the We Piddle Around Theater. I’ve not been disappointed yet and I certainly wasn’t disappointed Thursday.”

Like Warren, Laura Carpenter of Andalusia doesn’t miss many events at the We Piddle Around Theater so she was familiar with one of McBride-Smith’s stories.

“But a story well told is worth hearing again and again. I enjoyed hearing the story again as much as I loved hearing the stories I had not heard before,” Carpenter said. “I liked having  a Ladies Only event.  It was special and Barbara McBride-Smith probably told stories that she doesn’t tell in mixed groups – and we got to hear them.”

Marsha Gaylard, president of the Pike County Economic Development Corp, was a first-timer at the June Buggin’ event.

“I’ve always wanted to go but it just had not worked out until now,” Gaylard said. “I really didn’t know what to expect. I thought it would almost like a comedy. And, it was funny but it was so amazing to sit there and be greatly entertained with stories – stories that made you laugh and then a few minutes later touched your heart. Storytelling was much more than I expected it to be. Now, I understand how people fall in love with the art.”

The Sisters, Pat Rogers and Geraldine Golden, attended their first storytelling event and they were as captivated by Barbara McBride-Smith as she is by their fatback and biscuits and tomato gravy.

“We laughed; we cried and we had a good time,” Golden said. “I didn’t know if I would like storytelling or not but I really did. We liked all of her stories and our sister, June, laughed the longest and loudest. We left with a good feeling and saying for sure that we wanted to do that again.”

Barbara McBride-Smith will be back June Buggin’ at the We Piddle Around Theater tonight in Barbara, Barbecue and Bluegrass.