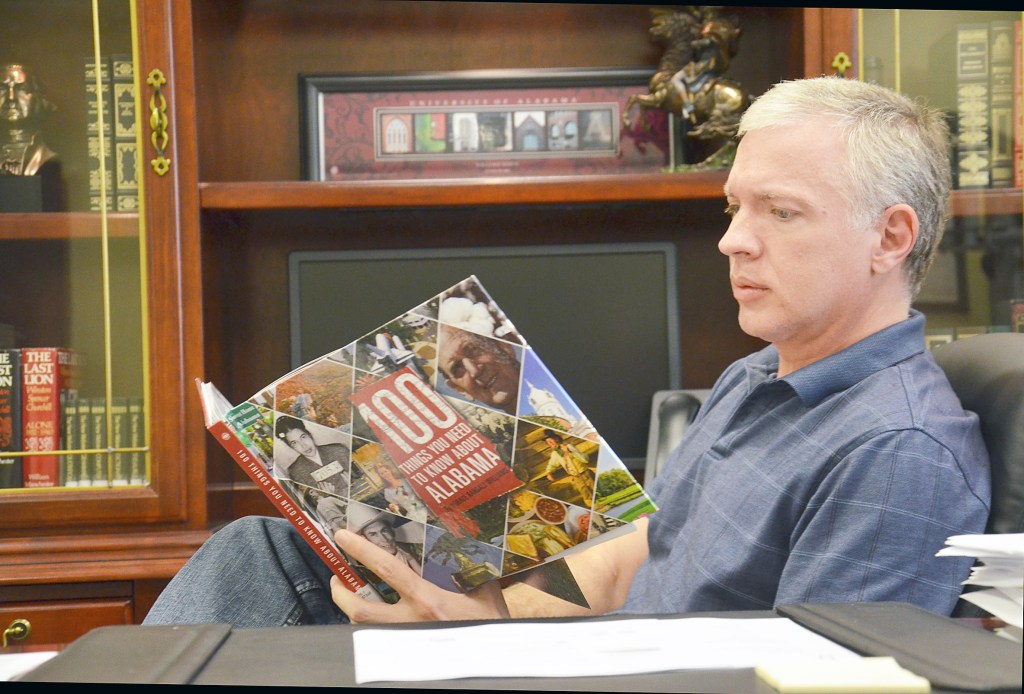 William White, Troy Public Library executive director, is searching for different ways to tell Alabama’s stories so residents and visitors alike will have a better understanding of and appreciation for “this unique and wonderful state.” Inset below, White and Karen Bullard, assistant director, are continuing plans for the library’s Alabama Bicentennial celebration. The library has commissioned a mural for the genealogy department for the milestone celebration. White said ‘years’ was purposefully omitted from the mural in hopes that visitors would be inquisitive and ask, “Two-hundred what?”

The Alabama Bicentennial Commission has been created to engage residents and visitors in educational programs, community activities and statewide initiatives that teach, inspire and entertain.

Simply said, to learn more about the places, the people and the stories that are uniquely Alabama.

And, to do that, would take more than one year. So the Alabama Bicentennial Commission has set the celebration for three years, beginning this year and continuing through 2019.

Each city, each town, each hamlet, each wide space in the road is encouraged to explore its own the natural beauty, its diverse people and its rich heritage, as well as discovering everything that is uniquely Alabama.

The City of Troy is abuzz with ideas of ways to celebrate Alabama’s Bicentennial that will highlight the places, people and stories of long and lasting significance in the city. Plans range from outdoor concerts to a musical presentation based on “The Day the Train Came to Troy.”

Stephanie Baker, co-chair of the City of Troy Bicentennial Committee said “Alabama 200” includes all 67 counties and stretches from the North Alabama Mountains to the beaches of the Gulf Coast.

“Alabama 200 is not just for celebrations planned by cities and towns,” Baker said. “These events can be family celebrations, church homecomings, school reunions, business anniversaries. Any events that celebrate the places, people and stories of Alabama.”

William White, Troy Public Library executive director, jumped on the Alabama 200 bandwagon early and plans to ride the wagon here and yonder until the last candle is extinguished on Alabama’s Bicentennial.

The 200th anniversary the Great State of Alabama is an opportunity to celebrate the state’s wonderful places, to remember the people who made the state great, to nurture the generations that will carry Alabama forward and to learn from the state’s history as it builds for the future.

And, where better to do so than at the Troy Public Library.

From the read-along books in the children’s library to adult non-fictions to historical videos to genealogical research, the TPL has it all.

“We have people from almost every state come to our genealogy department to do research,” White said. “Karen Bullard, assistant librarian, is an outstanding genealogist and we are planning several lock-ins or after-hours during Alabama 200 for those who are interested in tracing their roots and need assistance in getting started.”

White said his personal goal and the goal of the TPL is to highlight the important role Alabama has played in the nation’s history.

“There are foreigners who know more about Alabama history than many of us know,” he said. “During Alabama’s Bicentennial, the library will focus on the “firsts” in Alabama in sports, science, art, music, literature, inventions. We know a lot about sports figures but we don’t know much about the important role that Alabamians have played in science and the arts.

White said the Bicentennial provides Alabamians with the opportunity to become more informed citizens; therefore, it is certainly worth celebrating.

“There is great significance to history,” White said. “The old adage that ‘those who cannot remember the past are condemned to repeat it’ has a meaning for all of us. We have pride in the South and in Alabama. We’ve had days that were not sunny but, if every day were sunny, there would be no sunny days.”

White said during the three-year Alabama Bicentennial Celebration his hope is to create an open and honest environment in which Alabamians will become aware of how great the State of Alabama really is and will want to know more about who they are.

“We need to know about our places and our people,” he said. “We need to know our stories and we need to tell them.  We don’t need Hollywood to tell our stories for us. We need to tell our own stories of love and disappointment, of romance and adventure, of war and reconciliation, of discovery, of all the events that have defined us – that have made us who we are, not what we are. When we do that, then we’ll know that the entire 200-year journey has been worthwhile.”