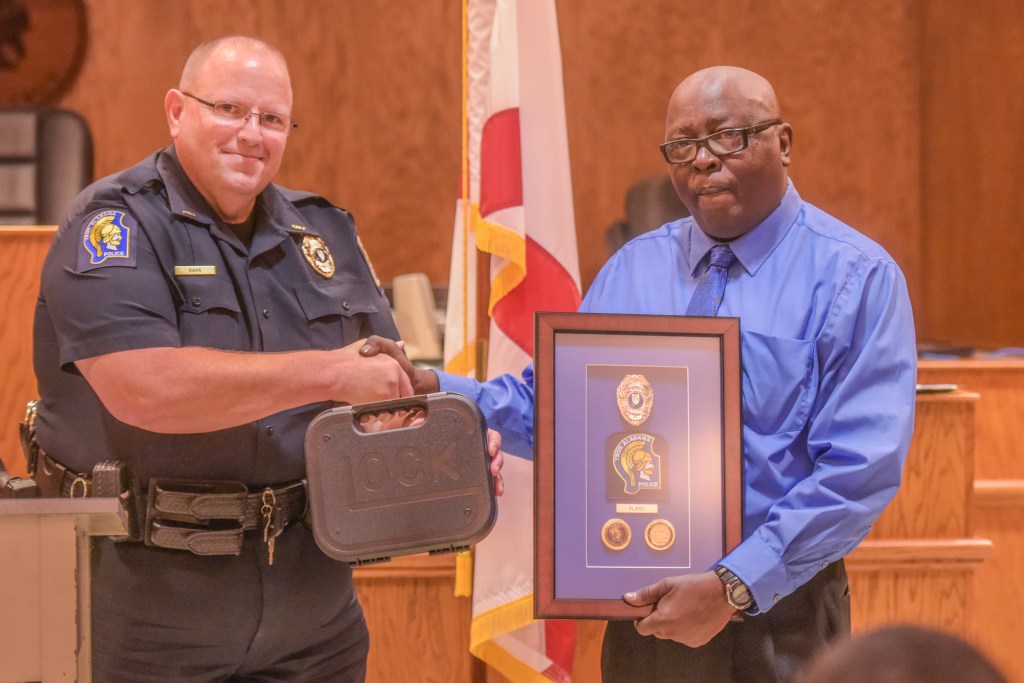 Messenger photo/Jonah Enfinger Troy Police Chief Randall Barr presents retiring officer Willie Bland with his badge and gun, commending him on his 25 years of service with the Troy Police Department. Friends and coworkers gathered at the municipal courtroom Thursday to honor the veteran officer.

After 25 years of “workin’ hard” for the Troy Police Department, veteran officer Willie Bland received his badge and service weapon as he start the next chapter of his life.

“From now on, every day’s a holiday,” said Marcus Paramore, president of the Troy City Council.

Friends an coworkers of Bland took time out during the special ceremony to reflect on Bland’s service to the community and to have some fun with him.

One of the things many people brought up was his catchphrase “workin’ hard,” the words he said whenever he’d pass by them in the hall or on the street.

“I just thought he said that to me, I didn’t know that’s what he said to everyone,” said Shelia Jackson, director of public relations for Troy.

“He always had a smile on his face and that goes a long way in this business,” said Troy Police Chief Randall Barr. “It’s a special but bittersweet moment. We’re losing an officer with a lot of seniority and experience.”

All four chiefs that Bland served under during his time at Troy were present to see him off including former chiefs Anthony Everage, Jimmy Ennis and Grady Reeves.

Capt. Danny Barron remarked that the number of people that showed up for the ceremony spoke for how much Bland is loved.

“My favorite quote of Mark Twain’s is ‘no man is a failure that has friends,’” Barron said. “Willie told me he didn’t expect this many people here, but that speaks for itself the kind of man he is.”

Fellow officer Greg Wright presented Bland with a “golden whistle” for his service directing traffic enthusiastically and Barr presented him with his badge, a plaque and his service weapon. Commissioner Homer Wright also offered a proclamation praising Bland’s service.

“Thank you everyone,” Bland told the crowd. “If you need anything, just call me.”

Bland was also thanked for his service in the U.S. Navy.