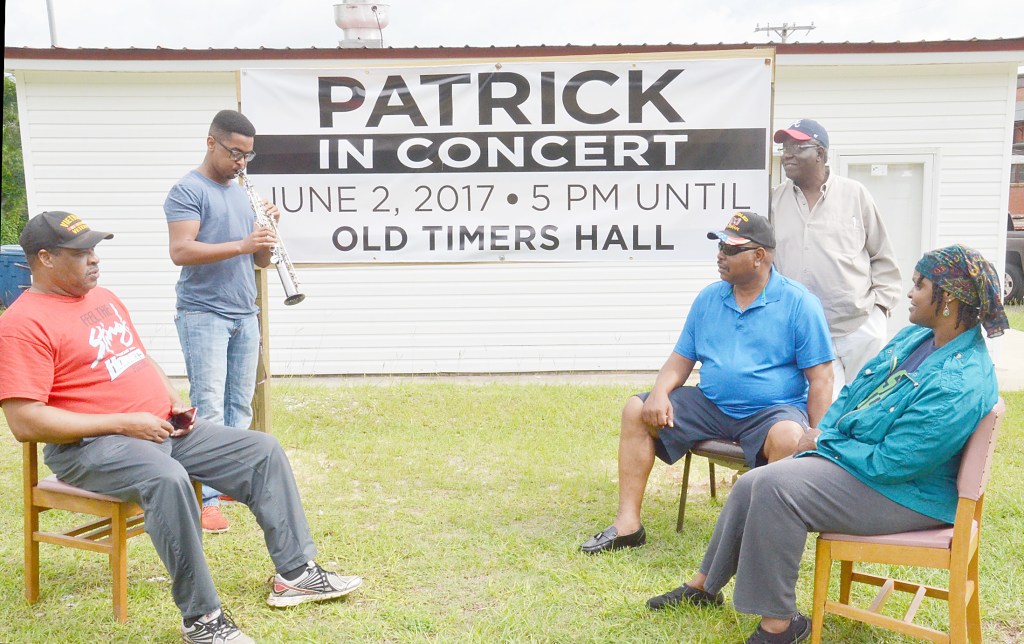 The Old Timers Hall will host a fundraiser for Trojan and Troy University student Patrick Jackson, who has been selected to participate in an educational study abroad with Troy University’s Department of Theater and Dance. Patrick will be a saxophone soloist for the group. The fundraiser will feature “Patrick in Concert” beginning at 5 p.m. at the Old Timers Hall on Academy Street in Troy. A donation will be good for either a fish or chicken plate prepared by the “old timers.” Pictured with Patrick from left, Mike Thomas, Willie Parker, Ray Money and Sherry Green.

Patrick Jackson of Troy has been selected to participate in an educational study abroad with Troy University’s Department of Theater and Dance.

“The future objective of the festival is that it will be a collaborative venture of all the arts – music, art, graphic design, dance, journalism…” Hicks said. “We are excited that we have three theater kids going. We will use Patrick with one and, hopefully, another of the dance pieces. He will be working with professional musicians and we are excited, for him, about that.”

Hicks said the Troy University students will be doing everything the DAP Festival is created around.

“We will have an instrumentalist with our dance, which will be around a chosen artwork in Pietrasanta,” she said. “We are excited about this opportunity and proud to have Patrick as a part of what we do.”

Patrick said he is honored to have been selected to participate in such an incredible educational study abroad with Troy University’s Department of Theatre and Dance in July.

“It is an honor for Troy University as we will be performing alongside music and dance professionals from around the globe,” Patrick said. “Earning the privilege to showcase my talent on the saxophone around the beautiful city of Pietrasanta is a humbling honor.”

And, the honor, the excitement, the pride of the opportunity is one that is experienced by Patrick’s family, friends and the community he represents.

“We’re all proud of Patrick,” said Willie Parker. “He’s one of those good guys that does things right. He plays his music but he also knows the importance of his books. He’s the kind of guy that we need more of. That would make the world a better place.”

Parker, the proprietor of the Old Timers Hall on Academy Street,” said those who gather for breakfast at the hall two or three mornings a week realize what an incredible opportunity it will be for Patrick to study abroad.

“We sit around in the mornings and talk sports, politics and religion. We have it going on,” Parker said laughing. “We all went to school at Academy Street and we talk a lot of school, too, looking back on the good times we had getting our educations.

“We take a lot of pride in what our young people accomplish and we are proud of Patrick. We wanted to do something to help him out on his trip. We decided to have a fundraiser at the Old Timers Hall that would feature ‘Patrick in Concert.’”

The idea was for the breakfast crew at the Old Timers Hall to cook chicken and fish and invite the community to come out and enjoy good music and good food.

“For a donation, those that come can get either a fish plate or a chicken plate and enjoy the concert,” Parker said. “Johnny Barron and his group will also be playing along with a few other musicians. It will be a time of good music, good food and good fellowship. And, the money we raise will go to a good cause – the support of one of our community’s fine young men, Patrick Jackson.”