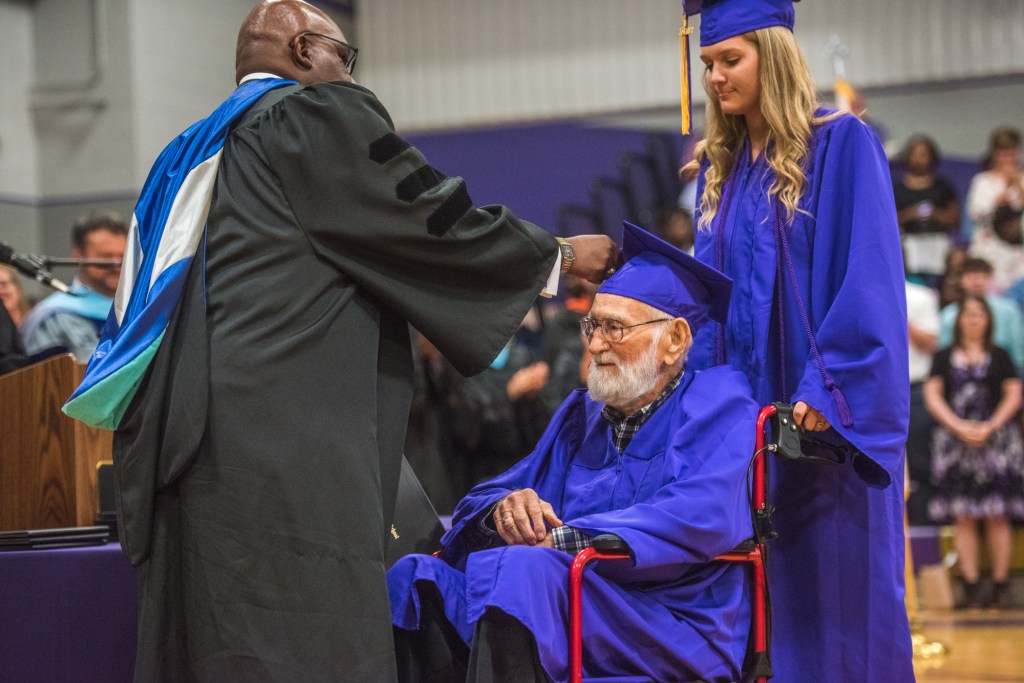 Like many of the 2017 graduating seniors at Goshen High School, J.P. Motes went out to dinner with his family prior to the graduation ceremony Thursday night. He ordered “the biggest steak in the house” at The Old Barn but graciously interrupted his dinner to accept congratulations.

Also, like many members of the GHS Class of 2017, Motes had mapped out his future. He plans to enroll at the University of South Alabama in August and study, archaeology or anthropology – but probably paleontology. Motes has been fascinated with dinosaurs, since he visited the Smithsonian.

“Paleontologist,” that’s what he’ll be. And, there’s one more thing in his future plans.

And, at age 101 and with his spunk and determination, J.P. Motes just might make it, his son, David Motes, said, with a smile.

But there’s one distinction that Motes has already achieved.

At age 101, he is the oldest graduate of Goshen High School. He received his diploma to a thunderous standing ovation Thursday night and, perhaps, more than a few tears were shed.

“We’re excited for Dad and so happy and proud of him,” said Judy Holmes. “He went into the Army when he was 18 and never went back and got his high school diploma. This is special for him.”

Motes grew up in Goshen and had a rather hard life as a youngster.

“When he was 11 years old, he had mumps and complications from the mumps kept him out of school for nearly a year,” said David Motes. “When he was able to go back to school, there was some conflict between him and his dad and his dad ran him off from home.”

Young Motes found himself in an unenviable position – behind the south end of a northbound mule.

“For two years, he worked the fields and finally he saw his way out,” his son said. “He was impressed by young men in Army uniforms. He learned that at Fort Benning in Georgia they had clean clothes to wear and shoes with soles and three square meals a day. That appealed to him.”

Fort Benning could be a way out and up for Motes, but Uncle Sam did not “want” the young fellow.

How he got to Fort Benning, Motes didn’t say but his son said he stowed away outside the gate until the coast was clear. Soldiers would “loan” him their uniforms. He would shed his ragged clothes, put on the uniform and scramble under the fence and enjoy the benefits of military service.

“He did that for a long time until he got caught,” David Motes said laughing.

When he was old enough in 1941, Motes joined the Army and served his country in the kitchen as a pastry cook and with the Air Corps as a mechanic. He was discharged in 1944.

Motes worked as a rural mail carrier in the Mobile area and often thought about getting his GED. A high school diploma would mean that he had achieved a goal in life. But he was busy with work and a family that included three children. He just didn’t get around to it.

“We learned that World War II veterans, who served in the military without the benefit of a high school diploma, were eligible to receive one so we looked into it,” Motes’ son said. “The administration at Goshen High School was very helpful in making it happen for Dad. They even found his high school records. We appreciate all of their efforts in making high school graduation a reality for Dad.”

For the J.P. Motes family, graduation at GHS 2017 will be a memory to last a lifetime. And, it will be atop the stack of favorite stories the family patriarch likes to tell.

Like the story about his flying an ultra light plane at age 90.

“The only reason Dad stopped flying was that he landed the plane in a field with a bull,” his son said. “The bull charged Dad and he ran and climbed a tree.

The bull finally gave up trying to  bang his prey out of the tree and went away. The next day, Motes went back for his plane and the bull was back and chased him again. This time Motes ran and dived in the bed of his pickup truck. Lying flat, he looked up only to find himself face-to-face with a snarling bull.

Another favorite story is when Motes was being ticketed by a Highway Patrol officer for not having windshield wipers.

And, J.P. Motes “walked” away from Goshen High School Thursday night with a high school diploma held high in his hand. Next stop, the University of South Alabama.