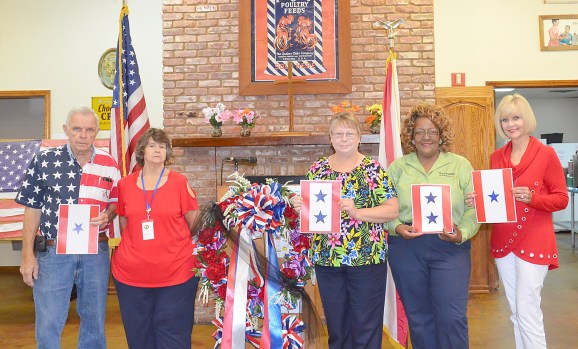 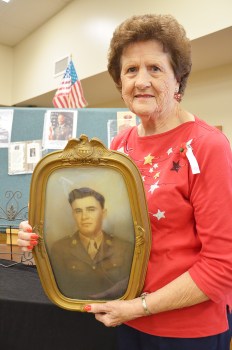 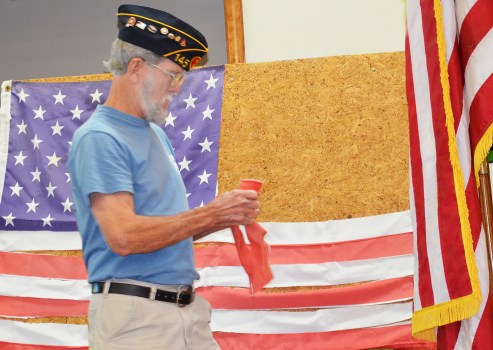 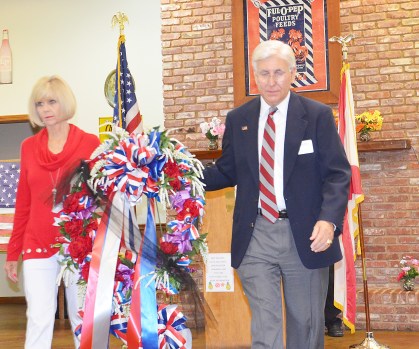 The Robert E. Barr Nutrition Center in Brundidge hosted a Memorial Day Service Friday to honor those who lost their lives in service to their country with special recognition of the loved ones of the center’s “family.”

Wanda Vinson, center manager, said there is no great sacrifice than that given in service to country and to one’s fellowman.

“We honor them all today,” she said.

The Rev. Randy Harvey recognized the “nation’s treasures that lie in graves on America’s soil and those who lie in grounds in foreign lands.”

Anita Phillips’ brother, PFC Beauford Lamar McKinney, served with the 17AAI Bomb Squadron during World War II. He enlisted in 1941 and became a Prisoner of War. His death was listed as March 7, 1943, but Phillips said but he was not brought home until 1947.

“I was only eight years old when Lamar went off to war,” Phillips said. “So, I don’t remember much about it but he was proud to serve and we were sad to see him go.

“We didn’t know where he was any of the time. I remember when Pearl Harbor was bombed. We sat glued to the radio, listening to every word because Lamar could be there.”

From the time, McKinney left home until he came home in a box, his family only received one card.

When Beauford Lamar McKinney finally came home from the war, the family met the train carrying his body at the Brundidg depot.

“The funeral home came and took him to the house,” Phillips said. “Lamar had come home but not the way we had prayed he would.”

Special music for the Memorial Day Service was presented by Cindy Boswell and a Flag Retirement Ceremony was conducted by Neal Thrasher, VFW Post 7055.

Thrasher explained that the American Flag’s blue field, the stars and the stripes all have special significance and each is to be ceremoniously removed and burned once a flag has been deemed “out of service.”

Center participants who have family members serving in the military were recognized with Blue Stars.

The Memorial Wreath was placed at the center’s memorial display by Linda Faust, who represented the City of Brundidge, and Pike County Veterans Affairs Officer Randy Ross.

Freddie Turner, quartermaster of VFW 7055 in Brundidge, read the names of the deceased veterans in the Brundidge area. A bell was rung as each name was called.

“Taps” was played to close the service.