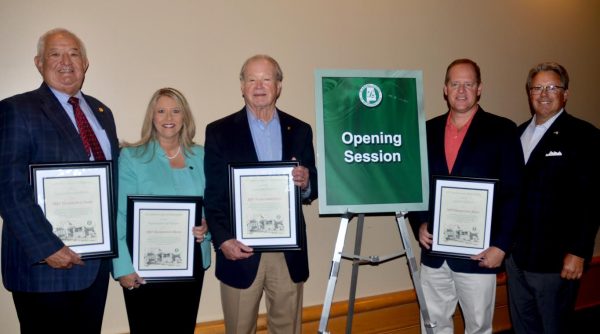 Rep. Alan Boothe, R-Troy, was honored last week by the Alabama League of Municipalities as a “hometown hero.”

Boothe was one of eight “Hometown Heroes” honored by the League for “defending municipal authority and protecting Alabama’s cities and towns from unfunded mandates and preemptions that would prohibit municipal leaders from preserving and enhancing the quality of life for Alabama’s citizens.”

Boothe said he was pleasantly surprised to receive the award.

“I was invited to the meeting but I didn’t know what it was for,” Boothe said. “But they insisted I go and I was pleasantly surprised to receive the award.”

Boothe spends a lot of time dealing with statewide issues and was recently chosen to serve as the chair of the House Rules committee. Even with the leadership role, Boothe said he always remembers his constituents.

“You can’t ever forget about the people at home,” Boothe said. “I’ve been trying to do the best for the people I represent in Pike and Dale counties. You can’t please everybody, but I try to do things I think the majority of people want. That’s the way I try to be.”

Boothe has been particularly active handling local bills for Pike County this session, sponsoring four bills out of the county including a bill to set up a referendum for Sunday alcohol sales in Troy and a bill authorizing a temporary sales tax in the county to fund construction of a new jail.

Greg Cochran, ALM’s Director of Advocacy and Public Affairs whose career working with the Alabama Legislature spans 30 years, said the League tracks and manages a significant amount of legislation every session.

“For several years, nearly half of all the bills filed during the Regular Session affect Alabama’s cities and towns in some fashion, making it a difficult landscape to navigate,” he said. “The League is extremely appreciative of its legislative partners who go above and beyond to protect Alabama’s municipalities and, ultimately, Alabama’s citizens. We battled several bills this session that would have implemented unfunded mandates on municipal governments and established preemptive licensure and sales tax remittances that would have severely hampered our ability to fund the essential needs demanded by our citizens. These eight legislative leaders have shown extraordinary resolve in protecting the authorities of municipal governments and we applaud them for standing with our municipal citizens in protecting their cities and towns across Alabama.”

Boothe has served the people of Pike and Dale counties for 20 years now and is still considering whether to run for a sixth term.

“Never say never,” Boothe said. “I’m trying to get the session and any special session behind me and then I’ll make my decision.”