AT THE WELL: Glenwood celebrates with annual festival 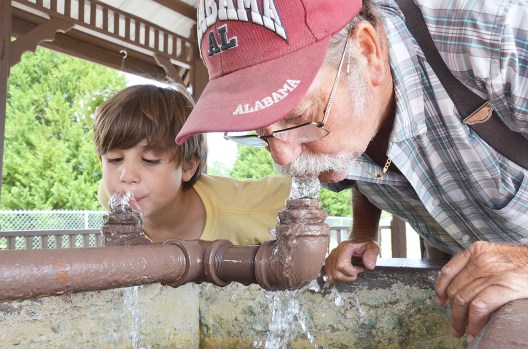 Messenger photo/Jaine Treadwell No matter the age, almost everyone who comes to the Festival at the Well in Glenwood eventually drinks from the artesian well that is the focal point of the annual arts and crafts festival. Jacob Jordan, age 7, and Morris Acreman, who’s not counting, agreed there’s no water as cool and sweet at the water from the Glenwood spring. 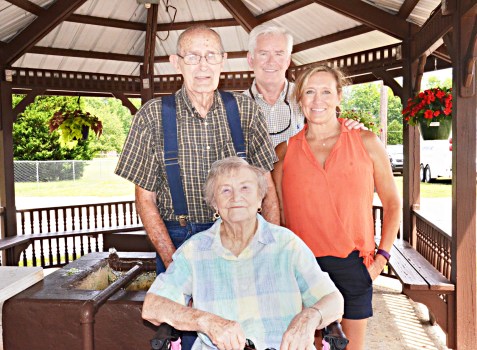 Messenger photo/Jaine Treadwell Glenwood native, Jennie King made the drive from Wetumpka to drink from the well and remember the good ol’ days in Glenwood. The town has changed but the spirit of friendship and fellowship still exist. King is pictured at the artesian well with her husband, James, their son Michael and his wife Robin. 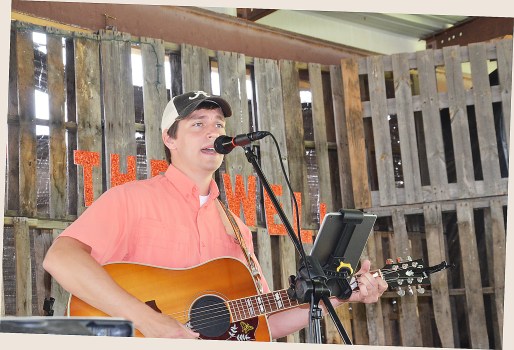 If the Festival at the Well in Glenwood were just an arts and crafts show, then it would have been close to a rainout Saturday.

But the annual Festival at the Well is more of a community gathering – a family reunion of sorts. So, even though the rain did hamper the festival it was not a washout, said Steve Holmes, a coordinator of the event.

“A wave of storms came through about the around the middle of the afternoon,” Holmes said.

“But our vendors were looking at their Smartphones or whatever and saw the storm coming and packed up. We were left with food vendors and folks in the pavilion listening to the music. We had a rather good crowd for the street dance but around 9:30 the bottom fell out and everybody made a dash for home.”

Holmes said an outdoor festival is always a gamble and one Mother Nature wins if she rolls the dice. “Vendors don’t have a choice but to pack up because they have time and money invested,” he said. “We would have ordered a warm, sunny day if we could have.”

But those who came early got to enjoy good weather, good shopping, good cooking and, as always, the fellowship of friends and neighbors.

Jennie King was a latecomer to the festival. Dark clouds boiled and a light rain was falling but there was a patch of blue sky about the size of a kitten’s mitten – a sure sign of fair weather ahead.

King’s husband, James, and their son, Michael and his wife, Robin, braved the weather for a walk back in time with her.

“I lived in Glenwood until I was about eight years old,” Jennie King said. “We lived right over on the corner of Curtis and College streets. I walked to the flowing well many times to get a drink of that cool, sweet spring water.”

King said the artesian well provided water that was far better than any water from a ground well.

“People would come to the artesian well and get good drinking water to take home,” she said. “Back then, the well was just one big pipe coming up out of the ground — not a drinking fountain like it is now.”

But folks gathered around the pipe much like today, when they gather under the pavilion that houses the drinking fountain to “gather” the news of the day.

“Back then, Glenwood was a bustling place,” King said.  “We had a mercantile store, a telephone office, a post office and Cassidy’ Grocery, and the well, we’ve always had the well and good spring water.”

So, even the rains couldn’t put a damper on King’s “homecoming” or on the good times that come when friends and neighbors gather on a Saturday afternoon at the artesian well in Glenwood.