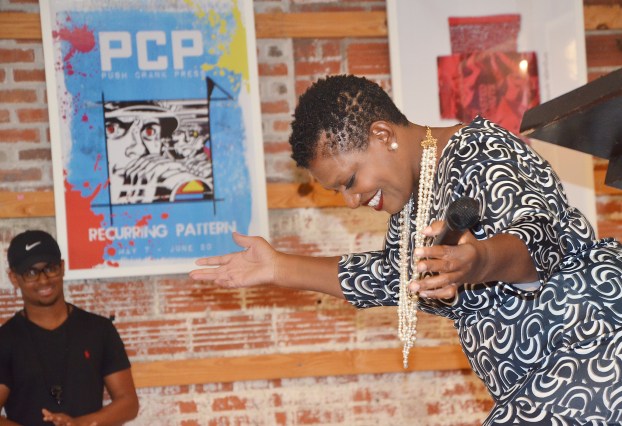 Messenger photo/Jaine Treadwell Tonya Terry speaks to the guests at the Older Amreicans Month luncheon held by the City of Troy Wednesday at The Studio. Terry talked about what she learned from the older generation and also gave them some advice.

The City of Troy celebrated Older Americans Month Wednesday with a luncheon at The Studio in downtown Troy.

Special guests were the senior adults at the Colley Senior Complex and the Troy Nutrition Center.

Troy Mayor Jason A. Reeves expressed his appreciation to the large gathering of seniors for what they have meant and continue to mean to the city of Troy.

“I am honored to be your mayor,” Reeves told the ‘older adults.’ “You are special people. You are our most treasured resources. We value you, not just today, but every day.”

Special entertainment was presented by Shelia Jackson and Willie B. Williams of the Troy Tourism and Public Relations Department and Troy University student, Patrick Jackson.

For Terry, being in Troy is coming home.

“I know most of you and appreciate all of you for the foundation you have laid for the generations that followed,” Terry said. “I learned from the older generation not to talk politics or religion. That can destroy relationships.

Terry asked the older Americans to pray for the nation’s young people.

“And teach them to pray,” she said. “I remember, as a child, getting on my knees to pray and my mother was next to me on her knees. We need to pray. Prayer changes things. So pray and keep praying.”

Terry also challenged the seniors to “be adventurous.”

“Play Bingo or do a pole dance,” she said and laughingly added, “No, not now!”

Terry closed with a joke and encouraged her audience to laugh even if it’s not funny.

Although Terry admitted that she’s not a comedian, her audience appreciated her humor.

The Troy Police Department is looking for the public to help them identify three suspects that they say stole checks... read more