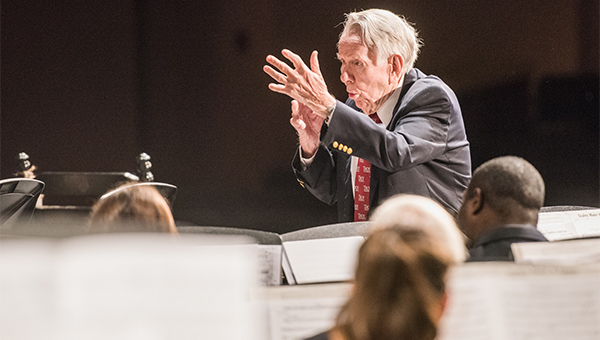 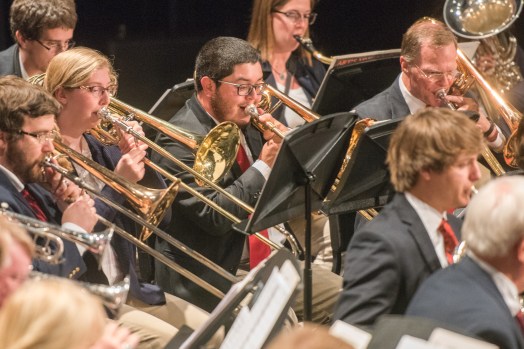 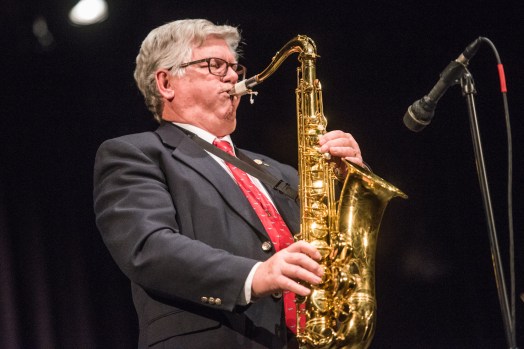 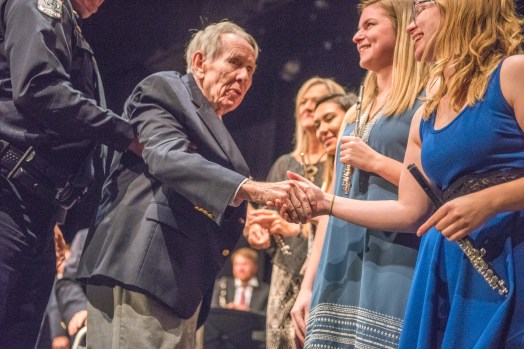 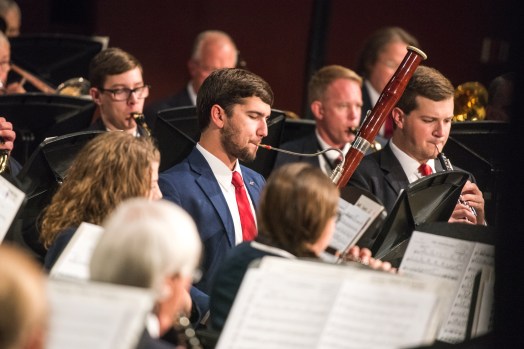 Dr. Johnny Long has often said that he doesn’t want to be remembered at the conductor who fell off the podium.

But what the legendary Troy University band director doesn’t realize is that legions of his admirers just want to see him on the podium.

On Monday night, much to the surprise and thrill of the audience at the Southeast Alabama Community Band Concert, Dr. Long stepped to the podium and conducted his favorite march, “The Stars and Stripes Forever.” Even before the last note was played the audience was on its collective feet in honor of Long and his legacy as “the world greatest band director.”

“Dr. Johnny Long is the world’s greatest band director and a world of folks will back me up on that,” said Ralph Black, who has been a friend and admirer of Dr. Long since he was “under his influence” as a ninth grade band student.”

Black said the members of the 2017 Southeast Alabama Community Band were honored to play “the march” under the direction of Long ,who spearheaded the efforts that resulted in President Ronald Reagan’s decision to declare John Philip Sousa’s “The Stars and Stripes Forever” the National March of the United States.

“We were all honored to have Dr. Long conduct ‘his’ march,” Black said. “There were tears on the bandstand and probably in the audience, too.”

The year 2017 was the Southeast Alabama Community Band’s 17th Annual Season with concerts played in Elba and Wetumpka prior to the Monday night concert in Troy. The band will close out its concert season at Frazer United Methodist Church in Montgomery Thursday night.

The band received extended applauses and standing ovations throughout the program that included several Sousa marches and favorite selections including “Americans We,” “The Sinfonians,” “Amazing Grace,” and “Barnum and Bailey’s Favorite.”

Ray Smith brought the audience to its feet with his saxophone solo and vocal rendition of “Three for Two.”

Dr. Johnny Long’s arrangement of  “Old Rocking Chair’s Got Me” was brought out of mothballs to honor three retiring members of the Southeast Alabama Community Band and the Troy University family, James Smith, Ray Smith, and Carol Franks.

James Smith, an associate professor of music, is an accomplished trombonist and jazz performer. Smith has conducted many musical theater productions, has served as the conductor of the Gulf Coast Symphony Orchestra and is in great demand as music adjudicator. He will continue to direct the Southeast Alabama Community Band.

Ray Smith is an associate professor of saxophone at Troy University. He has performed with such legends as Sammy Davis, Jr., Ella Fitzgerald, Lionel Hampton and Julie Andrews. He is an active soloist, recitalist, clinician and adjudicator. He will continue part-time as director of the “Sound of the South” Concert Band.

Franks, an associate professor of music, is an incredible flautist and a master teacher of woodwinds and music theory. For years, she served as the executive director of the Southeastern United States Concert Band Clinic and Honor Bands. She plays occasionally in the pit orchestra at the Alabama Shakespeare Festival.

Black said the Smith brothers will remain in Troy but Franks and her husband will move to the Washington D.C. area.

Black said playing of “Old Rocking Chair’s Got Me” was testimony to the outstanding talent of the musicians in the Southeast Alabama Community Band.

“The band had not practiced that song and were just told it was included in their folders,” Black said. “Half of the band got only half of the 32 pages of the music, but the band played on and did a great job of improvising.”

“This band is the greatest collection of home-grown, world class musicians ever put together,” Williams said.

“I don’t know of any other group like this. We are so fortunate to have this many tremendously talented musicians right here among us.”

Williams expressed appreciation to the band members and those who attended the concert and the other outstanding programs the TAC sponsored throughout the year. He said the TAC is in the process of putting together another outstanding calendar season for 2017-2018 that will conclude with another outstanding performance by the Southeast Alabama Community Band.