FIELD TRIP: Kindergarten Day is an adventure in learning 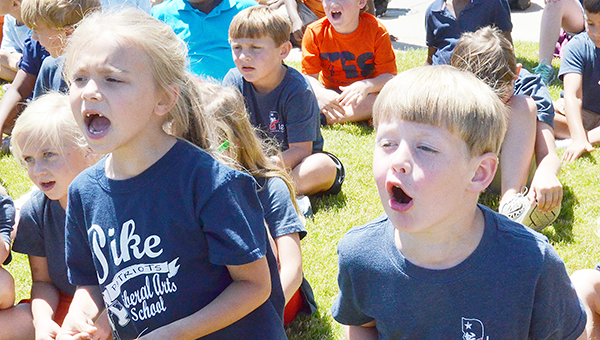 Over 250 kindergarten students from around Troy celebrated “Kindergarten Day,” an annual event put on by the City of Troy to acquaint the students with the city’s resources. The students visited the police and fire departments and the library to learn about the services the city provides to its residents.

A butcher, a baker, a candlestick maker?

But, no. Kindergarten Day in Troy Monday didn’t focus on the tradesmen that are such an important part of the community but on the community helpers that provide necessary services to keep the community save and improve the quality of life for all the city’s citizens.

Kindergarten Day is sponsored annually by the City of Troy and all kindergarten students within the city are invited to participate.

“The city has been sponsoring Kindergarten Day for several years in an effort to acquaint the students with the city’s resources,” Jefcoat said. “The kindergarten students visited the police and fire departments and the city’s public library. They also visited city hall where we had a photo booth for them.”

The kindergarten students had lunch under tents on city grounds and were treated to a puppet show with Sgt. Michael O’Hara of the Troy Police Department as the emcee.

They followed their leader, Sgt. O’Hara, in doing the Hokey-Pokey and turned themselves around. They went on a bear hunt and, when they found one, they ran away.

At the Troy Public Library, Magician Gary Ledbetter pulled a rabbit out of the hat and had a student levitate much to the amazement of the young students.

Jennifer Giles, Hank Jones ECC, said Kindergarten Day is an opportunity for all the young students in the city to come together for a day of fun and learning.

“The students learn about the services offered by the city. They meet some of the police officers and fire fighters and that’s important because these are community helpers,” she said. “They learn that these are people they can trust to help them and they should not be fearful of them.”

“We appreciate this opportunity for the children to come together to learn about all the things that the City of Troy does to help them and their families,” Drinkwater said. “The children enjoyed all the activities. This has been a fun day for all of us.”

“The Troy Public Library had a magician and the children found his magic tricks very exciting,” Windham said. “The fire fighters had a race to see which one could get all of his fire fighting equipment on first and the children really enjoy that. It was exciting for them.”

“In class, we learn about community helpers and what they do,” Black said. “Kindergarten Day is a fun way to highlight what we have learned. It is a day well spent and we thank the City of Troy for inviting us.”

Troy Mayor Jason A. Reeves expressed his appreciation to the teachers for their commitment to education and their dedication to the youngest of school-age children.

“Kindergarten Day is an important day and we look forward to having our kindergarten students visit us every year,” he said. “We were proud to have you. Thank you for coming.”