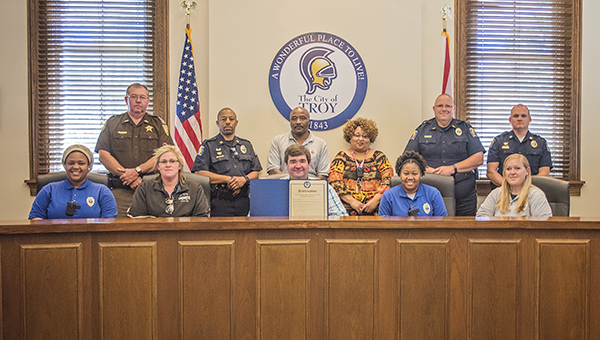 Over 250 kindergarten students from around Troy celebrated “Kindergarten Day,” an annual event put on by the City of Troy to acquaint the students with the city’s resources. The students visited the police and fire departments and the library to learn about the services the city provides to its residents.

Mayor Jason Reeves officially declared May 7 through May 13 National Correctional Officers and Employees Week in Troy.

“This is the first time we’ve done this and I’m really excited and proud to do this,” Reeves said. “You all have a tough job and you deal with things every day that most people don’t have to deal with. We’re very much grateful for what you do.”

Reeves said the week is meant to recognize the employees of the city and county jails for their work as well as state correctional officers living in Pike County.

Troy Police Chief Randall Barr said correctional officers are often left out of the limelight despite the difficult jobs they do.

“Nobody ever sees them,” Barr said. “They’re out of sight, out of mind. But they’re in there every day and they have a tremendous task to care for these inmates.”

“They’re just not visible because they’re in these secure areas and this is our chance to honor them,” Reeves added.

The proclamation recognizes the work correctional officers do not just to care for the inmates, but to rehabilitate offenders for the outside world.