Down and out: Rams score 28 runs in double-header sweep of Trojans 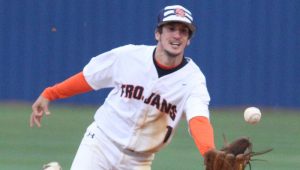 CHHS second baseman Grant Hughes flips the ball with his glove to first base for the out against Faith Academy Friday.

The Faith Academy Rams put on a hitting display Friday to claim 14-4 and 14-1 wins over Charles Henderson High in the third round of the Class 5A state playoffs Friday at Hogan’s Hole in Troy, eliminating the Trojans from postseason play.

CHHS ends the year at 20-13, while Faith of Mobile improves to 27-6 and will advance to play the winner of Beauregard vs. Rehobeth.

In the first game the Rams took an early 3-0 lead in the top of the first inning when Jackson Bell doubled, and Chris Sargent and Brooks Carlson hit back-to-back home runs.

Bell doubled to lead off the second inning for Faith, Sargent singled, Carlson doubled, Christian Waltman singled and Michael Garcia reached on a fielder’s choice to put the Rams ahead 6-4.

Faith Academy tacked on two more runs in the top of the fifth as Gabe Shepard reached on a fielder’s choice and Bell homered to extend the lead to 8-4.

Waltman homered to lead off the sixth inning for Faith, and the Rams added five more runs in the top of the seventh when Shepard singled, Bell reached on an error, Carlson, Waltman, Bell and Garcia hit consecutive singles and Braxton Bell reached on an infield error for the 14-4 lead.

Michael Morris worked six innings on the mound for Faith, settling in after giving up four runs in the first inning, striking out two and walking five to earn the victory, while Nicholas Dempsey pitched the seventh inning for the Rams.

CHHS collected five hits including two from Hunter Reeves, while Suddith, Wilkes and Charlie Tisdale had one hit apiece.

Jackson Bell and Waltman had three each for Faith, Sargent, Carlson and Ryan Bell had two each, while Garcia, Braxton Bell, Michael Morris and Gabe Shepard had one apiece.

In the second game CHHS was the visiting team and took a 1-0 lead in the top of the third inning when Jackson Murphy walked and later scored on a two-out single by Devan Suddith.

Faith batted around, however, in the bottom of the third to go up 8-1 on seven base hits including a double by Gabe Shepard and singles by Jackson Bell, Brooks Carlson, Christian Waltman, Ryan Bell, Braxton Bell and a single by Shepard as well.

The Rams added six more in the bottom of the fourth for the 10-run rule, with Sargent, Ryan Bell, Michael Garcia, Braxton Bell, John Bell and Sargent each collecting hits for the 14-1 victory.