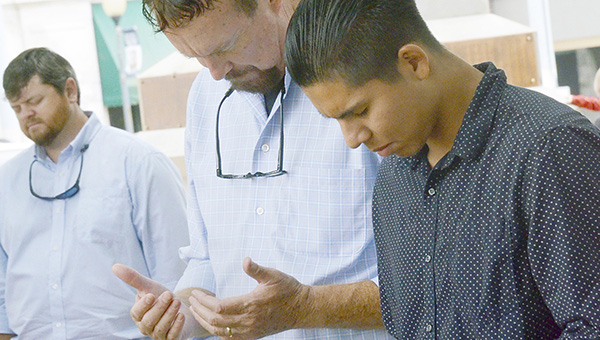 Local residents gathered on the Troy Square Thursday to pray during the National Day of Prayer. Events celebrating the national prayer day were observed all around Pike County Thursday including the conclusion of the days-long Pike County Bible Reading Marathon. The marathon began Sunday at Genesis 1:1 and made it to 1 Timothy before closing the marathon at noon Thursday.

The 2017 Pike County Bible Reading Marathon on the square in Troy ended promptly at noon on Thursday, with the concluding Bible verses being read from I Timothy.

The annual Bible Reading Marathon is dedicated to reading the Holy Bible in its entirety but, regardless, the annual Pike County Bible Reading accomplished its purpose of having a public reading of the Bible.

Ken Baggett, director of missions for the Salem-Troy Baptist Association, which coordinates the event, said God’s Word was read throughout the week with the assurance that it will not return void.

Dr. Lamar Duke, Alabama Baptist State Board of Missions, was the featured speaker for the 2017 National Day of Prayer Service that immediately followed the conclusion of the Bible Reading Marathon.

Duke said that, on this National Day of Prayer, if God’s people, which are called by His name, “shall humble themselves and pray and seek His face and turn away from their wicked ways, then God will hear from heaven and will forgive their sin and will heal their land.”’

Duke said those who want to make a difference so that God will “heal their land,” must look to the Holy Bible, which is a “practical book.”

“How do we do this?” Duke asked. “We do it with practical advice from the Bible. First, we must be a part of our communities. We must immerse ourselves in our community. We can’t sit back and wait for the next bus to heaven. We must be involved.”

But, being involved is not enough, Duke said. “We must also invest in our community. We must give of ourselves. We are engaged in spiritual warfare. We are at war against Satan. The war just doesn’t rage in other places. It is here in our communities. We can’t ignore it. We cannot let this war rage without us being involved.”

Duke said Christians must come together to battle the forces of evil in today’s world.

“A football team has 11 players. A basketball team has only five,” he said. “But in the war against Satan, there’s room for everybody. It is time for us to unite against evil. We are not alone in this war. God is in charge.”

The National Day of Prayer Service ended with the forming of prayer groups to pray for specific areas within the community.

Earlier in the day, a National Day of Prayer Service was held at the chapel at Troy Regional Medical Center. Chaplain Melissa Mahone shared a brief message about the importance of prayer. Members of the hospital staff were in attendance.

At noon, Brundidge residents and members of the Brundidge Police Department and city staff gathered at Brundidge City Hall.

Rev. Ed Shirley, Brundidge United Methodist Church pastor, said those in attendance formed a circle and each person was given the opportunity to share a prayer for this nation and its leaders and to give thanks for police officers and first responders.

“During the ceremony, the chimes at Salem Baptist Church played hymns, which provide a meaningful setting for all special services,” he said.

The importance of prayer in the formation of the country was recognized as early as 1775, when the Continental Congress asked colonists to pray for wisdom in forming a new country. President Lincoln issued a proclamation in 1863 calling for a day of “humiliation, fasting and prayer.”