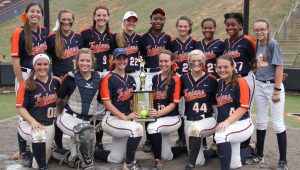 The Lady Trojans of Charles Henderson High reeled off wins of 15-5 and 5-0 over Brewbaker Tech of Montgomery to claim the Class 5A, Area 4 tournament championship Wednesday in Troy, its first area tournament title in over 10 years.

“We know it’s been 10-15 years since we’ve hosted or won the area tournament, so it’s big for our program to be able to do that,” said CHHS Head Coach Robin Snyder. “It’s big for our girls and future girls coming along behind them as well. As long as we get good defense behind our pitching and get hitting at the plate, we are going to win ball games, and we are going to give ourselves a chance to win a ballgame.”

The Lady Trojans, improving to 23-19 on the year, hosted Greenville and Brew Tech in the area tournament, and will advance to the Super Regional next week in Gulf Shores.

CHHS won their first game Wednesday 15-5 over Brew Tech, after trailing early 5-0 in the second inning. The Lady Trojans then rallied for five runs in the fourth inning and nine in the fifth inning en route to the win.

In the second game the Lady Trojans were led at the plate by Snyder with three hits, Kirkpatrick and Fox had two each, while Armstrong, Earles, Williams and Jaicee Todd had one hit each.

CHHS scored two runs in the first inning, one in the second and two in the fourth inning to pull away for the 5-0 victory.

Molly Kate Sanders worked all seven innings on the mound to earn the victory, allowing no runs on four hits and striking out one.

CHHS will play Thursday at 3 p.m. in Gulf Shores, and win or lose will play again at 6 p.m.