Shute honored as CHHS ‘Teacher of the Year’ 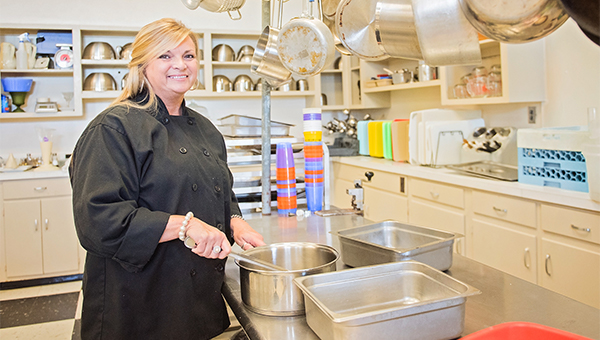 Students taking Paula Shute’s culinary arts classes at Charles Henderson High School should prepare to spend a lot of time outside of a classroom.

Shute was recently named teacher of the year at CHHS for her outside-the-box way of teaching her students about the culinary arts business.

Most recently, Shute took some of her culinary students to Houston to compete in a nationwide contest to prepare space food for NASA. The students prepared a dessert dish at the finals in April and are waiting to hear results back.

“It was an awesome experience,” Shute said. “How many students can say they’ve done this? This isn’t just a fun trip; this is something that can go on their resumes.”

Resumes are something the students in Shute’s classes shouldn’t have too much trouble with. When the students aren’t out putting their skills to the test in competition, they’re often in the kitchen learning how to cook. But Shute said this isn’t a “home eco-nomics” class like the ones of yesteryear.

The innovative program also allows for students to earn college credits and the state funds the certification testing.

Shute says her class has grown in the eight years she’s been over it with more and more students taking an interest in making something more of the classes.

“More students are really interested,” Shute said. “More and more are interested in it instead of being a class they can take and get food.”

Shute says the culinary classes are important to have as an option for kids that might not fit into some of  the more traditional areas.

“Some kids might be really good in math, science or athletics,” Shute said. “This is another avenue students might be good at.”

Shute says her classes also extend beyond working in a kitchen, so students taking the classes can find other related careers that better suit their interests.

“I really want to open their eyes to the career options,” Shute said. “They may not want to be a chef but own a hotel or an amusement park. And chefs can go anywhere; they don’t have to stay in this area.”

No matter what the students go on to do, Shute says they’re like family and she wants to see them succeed.

“They’re like my own children and I treat them that way,” Shute said. “We want our kids to succeed no matter what they’re in.”

Some other special things that the culinary arts students do include making meals for teacher appreciation days, school board appreciation days, cooperating with other pro-grams such as the Spanish department to present special meals and more.

The next big innovation that Shute is pursuing is the possibility of sending a team to Los Angeles for Gordon Ramsey’s new cooking show “The F Word” (the ‘F’ stands for ‘food’ Shute says).

If chosen, the shows will pay to have the team flown out to L.A. for four days to compete.

One of Shute’s long-term goals is to open a restaurant so her students can get ex-perience working in a true commercial kitchen.

Shute said she is honored to have been named teacher of the year.

“It’s very humbling that my peers think that highly of me,” Shute said. “I just love what I do. It’s not a job, it’s just a calling.”