BEAUTIFUL: Finding grace, strength in the battle against cancer 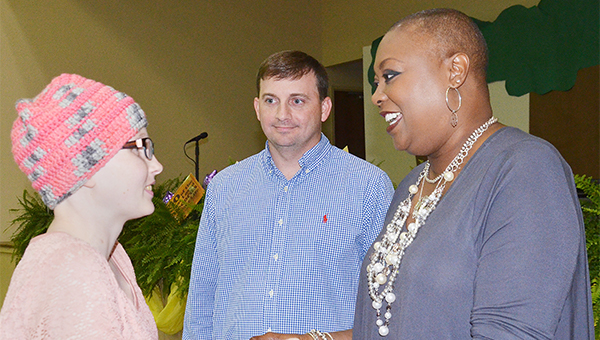 McKayla Campbell, left, Dsuty Taylor, center, and Annette Jones, right, are all cancer survivors. Jones and Taylor are this year's honorary chairs of the Pike County Relay for Life and Campbell's father Cowboy Campbell was recognized as caregiver of the year.

For Annette Jones and Makayla Campbell, bald is the new beautiful.

But the beauty of those two women goes much deeper. They have beautiful smiles, beautiful spirits and beautiful hearts, said Deedie Carter, co-chair of the 2017 Pike County Relay for Life campaign. “A lot of hearts were touched by the stories of our co-chairs, Annette and Dusty Taylor, and our caregiver of the year, Makayla’s dad, Cowboy Campbell. Our Survivors Dinner was a wonderful event as we celebrated the victories won over cancer.”

The annual Pike County Relay for Life Survivors Dinner was held Monday night at Park Memorial United Methodist Church. It was a time for reflecting on the battles won and looking to the challenges ahead.

“I know this is not the end for me right now,” said Jones, who is battling cancer for the third time. “My doctors are so positive and, if one thing doesn’t work, we’ll try something else.”

Jones was diagnosed first with breast cancer and then cancer in her neck. Following treatments. There seemed to be light at the end of the tunnel.

“In December, I got a great report. Everything looked good,” Jones said. “Then, in March, the cancer came back. That was devastating for me at first. Then, I realized that I just had more work to do.”

Jones is now undergoing another round of chemotherapy. She will have a treatment on Thursday but she’ll be at Relay on Friday night.

“How could I not be there?” she said. “So many people – my husband, Willie, and my sons, Jamie and Jarred – all my family and friends, my co-workers at Troy Cable and people I don’t even know have been praying for me. God has been so wonderful in my life. Every morning when I get up, every night and all through the day, I pray and thank Him. Life is such a beautiful thing and it could be so easily snuffed away. I will be at Relay to celebrate the victories and dedicate myself to meet the challenges ahead.”

And, Jones will be smiling through the pain of yet another battle with cancer.

“I smile, not just because I want to, but because I feel the joy of God’s love and the love of so many around me and because this could be much worse,” she said. “And I’ll be smiling because Makayla smiles. She has been through so much but she keeps smiling. Monday night, I could not stop looking at her – at her smile. She is sick but she is so alive and so ready to take the next challenge in her life. I can’t help but smile.”

Jones said she drew strength through Makayla’s “beautiful smile and sweet spirit” and through the abiding faith of honorary co-chair Dusty Taylor.

“To hear of all that Dusty went through and with such a great attitude,” she said. “He has such tremendous faith and to know he is cancer free gives me the confidence that I can overcome cancer, too. His faith strengthens me and makes we want to try even harder.”

For Taylor, being honorary co-chair of this year’s Relay for Life campaign was an opportunity to share the story of his battle with cancer and also his faith.

Three years ago in March, Taylor was diagnosed with multicellular Hodgkin’s lymphoma. The cancer was in his neck, chest, hip and his spleen ‘lit up like a Christmas tree” but “the Lord laid peace” on Taylor’s heart.

“The odds of someone with my kind of cancer surviving five years was 65 percent,” Taylor said. “I looked at that positively. I had a 65 percent chance of being able to raise a family, a 65 percent chance to walk my daughter down the aisle. In school, 65 was a D but it was passing. I made C’s. I could make it.”

Taylor faced his battle with cancer with the love of Christ in his heart and rode on the wings of the prayers of his family, friends and people all over the country who were joining them in prayer.

Taylor’s motto through it all was “My God is bigger than cancer” and he fought his battle with courage and an unwavering faith in God.

“God is not a genie that you rub and get three wishes,” he said. “God does not promise that you will not have trials in your life and I choose to live in faith and with joy.”

Today, Dusty Taylor is cancer free and he is using his trials to bring honor to God. He walks in world filled with sunshine.

And, for Makayla Campbell, smiles are the sunshine in her life.

“If I smile, people smile back,” said Makayla, who has been battling cancer for nearly two years. “When I would be in so much pain, I would imagine a world of unicorns and rainbows and I would smile and the pain would not be so bad.”

Makayla’s battle with cancer began with rapid weight loss in a short span of time. She was diagnosed with a brain tumor. When the cancerous tumor was removed, hopes were that she would recover quickly. But she began have seizures and was in the hospital for two months. During that time, her dad, Cowboy Campbell, never left her side.

Makayla was doing well until about three months ago when she began having pain in her abdomen. The doctors found a large tumor and a small tumor on one of her ovaries. The tumors were removed and Makayla has been undergoing chemotherapy for two months now.

For his constant and steadfast care of his daughter during her battles with cancer, Campbell was recognized at the 2017 Relay for Life Survivors Dinner as the Caregiver of the Year. In his quiet and unassuming way, Campbell accepted the award with appreciation.

Any man would do the same for his little girl, said Campbell who was never shy about asking for prayer for his daughter.

“It was God working through the doctors and nurses that brought Makayla this far,” he said. “We give God the glory.”

And, for Makayla, the world is more like she wants it to be – a happy place where unicorns play and rainbows are the promise of yet another day.