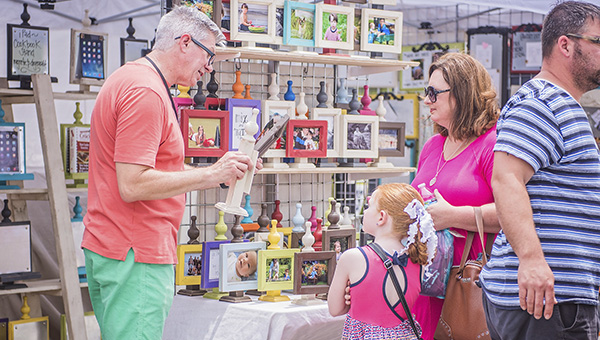 Dozens of artists displayed all kinds of artwork at TroyFest this weekend from paingings and photographs to sculptures and woodcarving– and everything in between. Food vendors and community organizations were also on hand to welcome the many people that came down to see the artwork.

TroyFest 2017 is now in the books and what an arts and crafts festival it was.

Morgan Drinkard, publicity chair, said in all aspects, TroyFest was a success.

“It was a great festival,” Drinkard said. “We were very pleased with the artists’ work and the variety of the mediums. We had a good mix of artists that have been with us traditionally and new art-ists.”

Drinkard said the TroyFest committee, the City of Troy Tourism Department and the Pike County Chamber of Commerce are dedicated to providing the artists with true Southern hospitality.

“TroyFest has the reputation of treating its artists extremely good,” Drinkard said. “We want them to know they are the reason for the festival and we appreciate their support.”

Drinkard said community support was good and expressed appreciation to all those who came out in support of the artists and the festival.

“We had a good attendance, especially on Saturday,” she said. “We closed at three o’clock Sunday because of weather conditions, not so much here in Troy but in the directions some of the artists had to travel. We wanted them to have time to pack up and get out ahead of the weather. We do all we can to make sure we take care of the artists.”

Jerry Grann of Indianapolis, Indiana, was awarded Best of Show for his designer jewelry.

“And, anyone who saw his work would understand why Jerry Grann was awarded Best of Show at TroyFest 2017,” Drinkard said. “The placement of the stones, the attention to detail — his work is exquisite. He was certainly deserving of TroyFest’s top award and we congratulate him and all of the artists that participated.”

Drinkard said TroyFest can be only a good as its artists and this year, TroyFest was extremely good.

The award winners in other mediums were:

Most Creative Use of Materials – Carl Weeks