Coming up aces: Pitching leads the way in Charles Henderson’s second round sweep of Valley 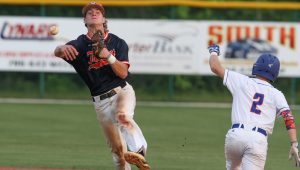 Photo/Dan Smith
CHHS shortstop Carson Tucker turns a double play against Valley Friday in the second round of the AHSAA playoffs. The Trojans swept Valley by scores of 11-2 and 6-1.

Charles Henderson High got strong pitching from Hunter Reeves and Graham Wilkes to take down Valley High by scores of 11-2 and 6-1 on the road Friday, securing them a third-round berth in the AHSAA Class 5A state playoffs.

“I tip my hat to Hunter and Graham, they’ve been pulling our wagon all year,” said CHHS Head Coach Josey Shannon. “I’m very proud of this team regardless of what the future holds. We came out here in a hostile environment and took control early. That’s what I’m the most proud of.” 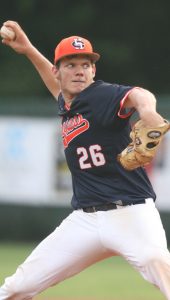 The Trojans will face either Briarwood Christian or Faith Academy in the third round next week. Those two teams split Friday and play the third and deciding game Saturday.

In the first game the Trojans, now 20-11, took an early 4-0 lead in the top of the first inning when Hunter Reeves singled, Jabronski Williams reached on an infield error, Jackson Murphy doubled, Bryson Gandy singled to drive in two runs, Carson Tucker reached on another infield miscue, with Devan Suddith and Graham Wilkes hitting back-to-back singles for the 4-0 advantage.

Valley picked up a single run in the bottom of the fourth inning to cut the lead to 4-1, but CHHS bounced back with seven in the top of the sixth inning to go up 11-1. Suddith and Wilkes hit singles, Noah Lowery was hit by a pitch, Reeves drove in a run with a sacrifice fly, and with the bases loaded Williams cleared the bags with a triple to right-center. Gandy drew a two-out walk, Tucker was hit by a pitch, Charlie Tisdale doubled to drive in two runs and scored from second on a single up the middle by Suddith for the 11-1 lead.

Valley picked up another single run in the bottom of the sixth to make it 11-2, but Reeves bowed up to keep it at that. Garrett Tucker pitched the final one-third of an inning to close out the game.

Gandy and Suddith each had three hits apiece in the first game, Tucker and Wilkes had two, while Reeves, Williams, Murphy, and Tisdale had one each.

In the second game Wilkes was dominant to earn his 10th win of the season, as he allowed one earned run on only three hits over seven complete innings, striking out four and walking one.

CHHS took a 3-0 lead in the second, added a single run in the third and two more in the sixth en route to the 6-1 win.

Reeves, Gandy, Carson Tucker, Wilkes and Grant Hughes had two hits apiece, while Williams and Suddith had one hit each.

Should Briarwood win Saturday the Trojans will be on the road, but if Faith Academy wins CHHS is expected to host the third round.