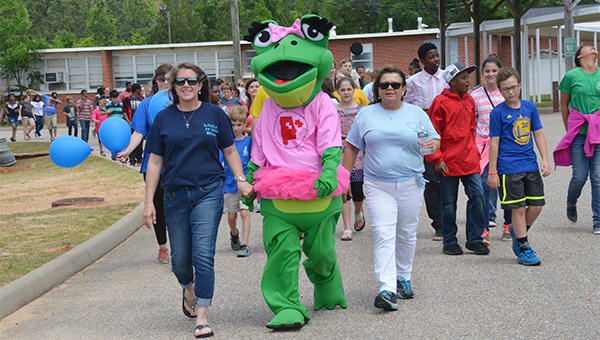 Goshen Elementary School participated in the 2017 Autism Awareness Walk Friday not just to raise awareness for the rising disorder, but to honor the autistic students at the elementary school as well. There are eight boys with autism at the school The frog is the one of the mascots for the Autism Society of Alabama. The mascot led the students in the march.

Goshen Elementary School participated in the 2017 Autism Awareness Walk Friday afternoon. For the students, the walk meant more than just an opportunity to get out of class for a while.

Wanda Corley, GES principal, said students in the middle and upper grades have an understanding of autism and are supportive on those who have the disorder.

“Autism is one of the fasting growing developmental disorders in the United States,” Corley said. “Autism prevalence figures are growing. It now affects one in 68 children and one in 42 boys. We have eight boys at Goshen Elementary School who have autism.”

Because autism is so fast growing, Corley said the number of students with autism is likely to increase.

“At Goshen, we want to make sure that we are equipped to handle students with autism,” she said. “We want to provide them with the services that give them the best opportunities to be successful in life. Our teachers are trained to work with children with autism and we provide them with physical therapy, speech therapy, occupational therapy and other outside services.”

Corley said it is a goal of GES for its students to be accepting and supportive of students with autism.

“This week, we have had several activities designed to bring awareness to our students about autism,” she said. “One of our dads whose son has autism spoke to the students in the upper grades and what he said had a huge impact. Also, as part of Autism Awareness Month, we had fundraisers to support the Alabama Autism Society.”

The students had opportunities to purchase baseball caps for a dollar and ice cream for a dollar with all money raised donated to the Alabama Autism Society.”

The parents of students with autism visited with them on Friday afternoon and enjoyed the fun associated with the Autism Awareness Walk.

Amanda Miles and her son, John Maison Hurley, participated in the balloon release to bring awareness to autism.

“Maison was diagnosed with autism when he was six years,” Miles said. “His communication skills were very poor. He actually communicated better with adults than with other children.”

As with most children who have autism, Maison has no fear.

“He is not afraid of anything,” Miles said. “He is likely to run out into a busy street or off into the woods. He jumps on everything as if it were a trampoline.”

Also, as with most children with autism, Maison has meltdowns that are most often brought on by noise and anxiety.

“When he had a meltdown, he has to be taken to a quiet place until he calms down” Miles said. “He loves school and he likes being outside.  He does extremely well in math but has difficult with reading.”

Although Maison likes being at school, home is his safe place.

“There is no cure for autism,” Miles said. “My hope for Maison is that we can and he will learn to manage his autism so that he can have the best life possible for him.”

Melonie Williams has the same hope for her son, Terrevus, who is 13. He was diagnosed with autism when he was four.

“He speech was delayed but that was because he had fluid in his ears and could not hear,” Williams said. “When that was corrected, his speech didn’t improve. That’s when we knew something was wrong.”

Williams said Terrevus also has no fear and that is a real concern because he is going to high school next year and that will be unfamiliar territory for him.

For Terrevus, cooking is his outlet and his mom supports him in that.

“I want him to enjoy doing things,” she said. “That’s important. Terrevus has mood swings, really tantrums sometimes. I’ve learned to handle those. Usually, I just leave him alone and he’ll soon realize I’m not giving in to he and he’ll stop.”

Williams said it is hard to accept that you child has autism.

“But, once you do, you do what you have to do to make sure that they have the best life possible,” she said.

Miles and Williams said GES is doing an outstanding job in providing the opportunities for students with autism so that they will have the best possible chance at a good and successful life.

“We really appreciate that,” they said.

Corley said the sooner a child is diagnosed with autism, the greater the chance of success in dealing with the disorder.

“There is no cure but autism can be managed,” she said. “That is our goal, to do what we can and all we can for our students with autism. And, that includes making sure our students understand what autism is and are accepting and supporting of those who have it.”