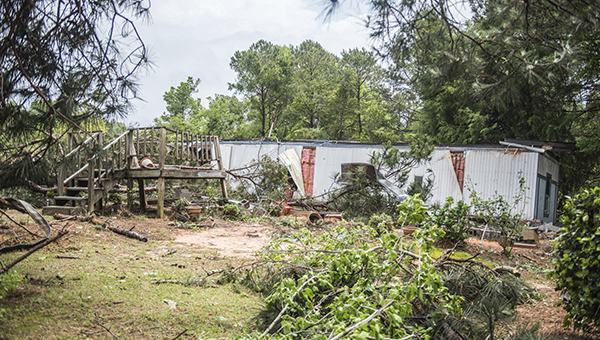 The home of Rubie Townsend was ripped from its porch and flipped upside down Thursday when a tornado touched down near the home.

A tornado touched down between Troy and Banks Thursday morning, bringing trees down on houses, destroying sheds and flipping a mobile home off U.S. Highway 29.

The only occupant of the home, Rubie Townsend, was away at the Troy Nutrition Center when the tornado hit.

“I thank the Lord,” Townsend said. “I didn’t go yesterday and thought about not going today, but I got up and went.” 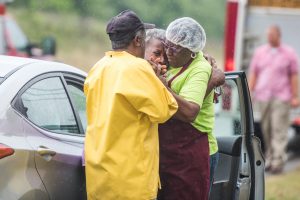 Rubie Townsend is comforted by friends and neighbors after seeing her home destroyed by a tornado. Townsend was not home when the tornado hit.

Townsend’s mobile home was picked up by the tornado and flipped on its head about 10 feet back from where it originally rested. A large tree near the home was also brought down where the house would have been.

Warren Thomas was in his residence nearby when the tornado came through.

“I heard them say the tornado was coming down (U.S. Highway) 29,” Thomas said. “By the time I shut my door the wind was picking up and I saw tin flying through the air, then I saw my barbecue grill fly past the window.”

Annie Thomas was also home asleep when the tornado hit.

“Those alerts went off on my cell phone and woke me up, but by that time, I heard the tornado coming,” she said. “We were lucky.”

EMA Director Jeanna Barnes said the tornado caused damage along Highway 29 as well as nearby Butter and Egg road, Union Hill Road and county roads 5501,5502,5503, 5504 and 7757. One tree stretched al the way across US-29, causing traffic to have to be rerouted.

“I think it ended up going all the way to Bullock County,” Barnes said.

While the tornado hasn’t been confirmed by the national weather service yet, Barnes said that between the debris signature found on radar and the damage assessment, she is confident that a tornado did touch down. Local residents Adam Prendergast and Ron Pierce also caught the tornado on camera.

Barnes said that the severe weather risk for the day had been low, but possible.

“(The National Weather Service) had told us there was a slight risk and had the timing from 5 to 9 this morning, but then that changed and they said that some storms should remain below severe limits,” Barnes said. “But, you know, we had thunderstorms and any storm could become severe. That’s why we like people to always be prepared.”

Officials with Troy Utilities said only a few lost power due to a power line that went down near Townsend’s home. No injuries  or casualties have been reported.