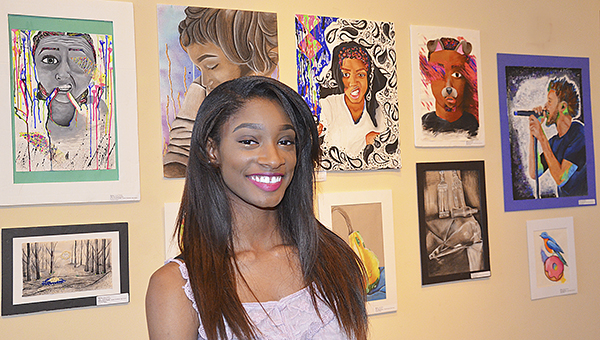 Tatayana Lee, a senior at Charles Henderson High School, is the receipient of the prestigious Jean Lake Scholarship. Her award-winning portfolio is on display this weekend at the Johnson Center for the Arts, along with the artwork of other winners in the student art show.

Tatytana Lee, a senior at Charles Henderson High School in Troy, has been awarded the 2017 Jean Lake Memorial Scholarship. The $2,000 scholarship is awarded annually by the Troy Arts Council to a senior at a local high school who has exhibited outstanding artistic abilities.

The late Jean Lake was a well-known and highly talented primitive artist from Troy. The city’s annual art and crafts festival was originally the Jean Lake Festival. TroyFest continues to honor Lake’s memory with the annual Jean Lake Memorial Scholarship.

The recipient of the award is invited to exhibit his or her work at the Johnson Center for the Arts during TroyFest, which is held the last weekend in April.

Tatytana expressed appreciation to the Troy Arts Council for the scholarship and to the Johnson Center for the Arts for the opportunity to exhibit her work.

“I’m so grateful for this award and for the confidence that the Troy Arts Council has shown in me,” Tatytana said. “I’m excited to have my artwork at the Johnson Center for the Arts. I thank everyone.”

Tatytana said she was surprised to be named the recipient of the scholarship.

“My artwork is a different style and it’s not the kind of artwork that I thought would win,” she said. “It’s not traditional art and I thought someone who does more traditional art would win. But I thank the Troy Arts Council for its acceptance and recognition of what I do.”

Tatytana said she has worked to develop her own style.

She pointed to a self-portrait in which she is looking down and away.

“It wanted to hide my feelings so I was looking away from everything,” she said. “I like doing portraits because I like to paint what I think some is feeling, not so much what they look like.”

In one of her paintings much of her subject’s face was covered by a mask as if he were hiding something. Another depicted anger and another frustration in it subject.

“I used bold colors and strong marks and I also have borders that are kind of signatures of my work,” Tatytana said. “I can do a still life but that’s not what I really like to do. I like to paint people.”

“Tatytana is an AP art student. He concentration portfolio is a good blend of classical elements with bold colors and different subjects,” Walden said. “She doesn’t like to do still life art but she does it extremely well and that’s the mark of a good artist. Tatytana is a dedicated young artist. She has developed her own style and she plans to pursue art as a career. She is deserving of the scholarship and I congratulate her.”

“One day, I would like to work in a magazine art department and with a magazine that is not quite so traditional,” she said. “One that is more my style.”

Tatytana’s artwork is on exhibit this weekend at the Johnson Center for the Arts along with student art from around the county and Troy University artwork.