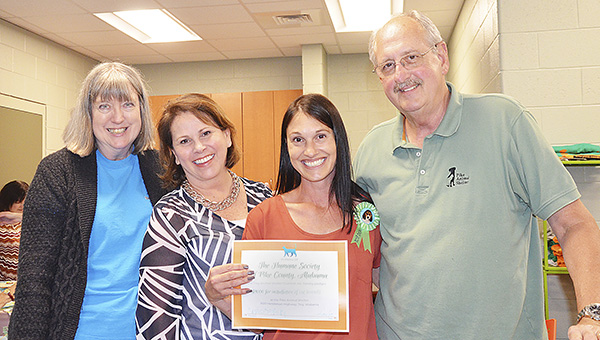 The Troy Animal Shelter Coalition Inc. made a donation of $1,000 to the Pike Animal Shelter in honor of the Humane Society of Pike County. The donation is to be used for the installation of cat kennels at the shelter. Pictured from left, Donna Brockmann, HSPC president, Donna Schubert TASC, Jacquline Meeks, shelter director, and Chris Schubert, TASC. Inset, Jessica Stevens was one of several people who adopted cats from the Pike Animal Shelter last week. The shelter has a large number of dogs and puppies and several cats that are hoping to be “rescued” soon.

The Humane Society of Pike County hosted a shower for the “babies” at the Pike Animal Shelter Thursday and Donna Brockmann, HSPC president, said it was literally “raining cat’s and dogs” at the event.

The shower was a fundraiser for the human society but, because it was held in the “smallish commons area,” only 23 tickets were available.

But even so, the tickets holders came bearing gifts for the shelter babies.

“Everyone was very generous with their gifts of cat food, dog food and bleach,” Brockmann said. “Those three items were on the shower wish list and will help meet the needs for food and cleaning supplies at the shelter.”

The big news of the night was the donation of $1,000 to the Pike Animal Shelter from the Troy Animal Shelter Coalition Inc. in honor of the Humane Society of Pike County. The donation was designated to be used for the installation of cat kennels at the shelter.

“The Humane Society of Pike County is very appreciative of the $1,000 to benefit the Pike Animal Shelter and all the cats and kittens that are here and will be here until they find forever homes,” Brockmann said. “We thank Chris and Donna Schubert for making this possible. They are extremely supportive of the animal shelter, gracious in their giving and dedicated to the humane treatment of all animals.”

Brockman said a highlight of the “Raining Cats and Dogs” shower was the behind the scenes tour of the new animal shelter.

“This is a state of the art animal shelter for a county the size of Pike County,” Brockmann said. “It is a beautiful facility and it has taken decades for it to happen. It is a facility that all Pike County can take pride in. An animal shelter was greatly needed and is greatly appreciated by all of those who have worked so hard for so long to make it a reality.”

Jacqueline Meeks, shelter director, and her staff are extremely busy caring for the animals that are being housed at the shelter. As of the shower, there were 62 dogs and puppies and a growing number of cats at the shelter.

“Two cats were adopted today,” Meeks said. “We think that several other cats will be adopted within the next few days.”

Jessica Stevens, a Troy University student from Ozark, said she finds it easy to fall in love with a cat.

“I came to the shelter to get another cat but it was already taken but I love this one and I’m happy to be taking her home,” Stevens said. “Having a shelter like this will be a benefit to Troy because a lot of people are finding that rescue animals make really good pets.”

The Pike Animal Shelter is located on the Henderson Highway in Troy.