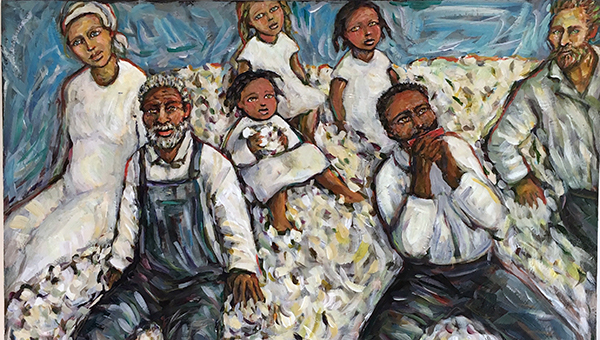 Messenger photo/Jaine Treadwell
Former Troy resident Mary Ann Casey won a Best of Show award at the Alabama Artists: Roots and Wings Art Exhibition in Selma April 9 for her acrylic painting titled “Soul, Cotton and Van Gogh” pictured above. Casey said she wanted to honor Van Gogh and a piece that would relate to Selma and its past.

Casey was presented the $1,000 prize in a competition that included six categories and 200 entries. The Roots and Wing Art Exhibition was sponsored by ArtsRevive.

Casey, whose “art from the heart” is heavily influenced by the Southern Experience, was in Troy Monday and expressed “surprise” at winning the top prize in the prestigious exhibition.

“This was a real honor and was certainly unexpected,” Casey said. “I had wanted to do a piece that would relate to Selma and its past and somehow to embody the spirit of Vincent Van Gogh. For some time now, he has been on my heart and my art comes from the heart.”

For the piece titled “Soul, Cotton and Van Gogh,” Casey chose a cotton wagon to honor that period of Selma’s history.

“For a time, cotton was king in Selma,” she said. “And I have picked cotton and I have been around people who were cotton farmers and also those who worked in the fields. I embody their spirits just as I do Van Gogh’s. I wanted to do a piece the honors him as well.”

The piece includes a wise old man, a dominant woman figure and three young girls. The piece has a musical overtone that is permeated by the loneliness Van Gogh suffered from psychotic episodes and delusions. He often neglected his physical health. He didn’t eat properly and drank heavily.

“He was an incredibly talented artist but he was depressed and lonely and finally shot himself and died,” Casey said. “I want to ease his loneliness by giving him friends. I can do that through my art. ‘Soul, Cotton and Van Gogh’ is just one of my paintings that will include Van Gogh – that will give him friends.”

Casey said she connects with Van Gogh through her artwork.

“Love, community, music and friends transcend loneliness,” she said. “In my future paintings, Van Gogh might be dancing or loving a child or being a friend. That’s what art can do if it comes from the heart.”

For Casey, art has provided her with the opportunity to be what she wants to be – needs to be — not what she is expected to be.

It is the freedom to forge friendships with the Vincent Van Goghs of the world and to be out there without fear.

“That’s the way I want to live my life – with love, friendship and a passion for the arts,” she said. “And, most of all – without fear.”