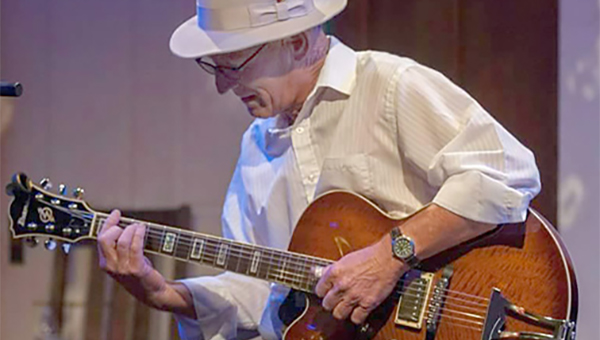 Local musician, singer/songwriter Lenny Trawick will be honored as the living honoree at the Wiregrass Blues Festival in Dothan this weekend.

Gil Anthony, disc jockey for Blues Power, said each year, along with entertainment provided by several blues artists, the event also spotlights two honorees during the event. One of those is a living honoree and one is deceased and both have played a huge part in the history of blues in the Wiregrass.

This year’s living honoree is Lenny Trawick of Brundidge who was raised in the heart of the Wiregrass in rural Josie.

“Lenny started singing and playing gospel music with his family at local churches,” Anthony said. “He soaked in the mix of gospel, country, blues and rock music that permeated the Wiregrass musical landscape. His musical career has spanned more than five decades and has featured an amalgam of blues, gospel, country and jazz, performing in bands and also as a solos artist.”

Trawick said he is greatly honored and humbled as well.

“It’s always a good feeling when someone recognizes what you do,” he said. “I appreciate being chosen for this honor.”

Trawick said, although he plays different types of music, it’s the blues that he prefers.

“It’s the feeling that you get when you play the blues,” he said. “It reminds me of those field songs that were sung in the cotton fields. It’s more like gospel but different, too.”

He said some people say the blues is sad and depressing. However, he said it’s not. It’s expressing a feel, a mood. It’s thoughtful and reflective.

“The blues originated in the Mississippi Delta and New Orleans,” Trawick said.

“It has a sound of its own. You don’t mistake the blues. Some people say the blues is the black man’s music and country is the white man’s blues. But the blues is its own music. You either love it or you don’t.”

And there’s no doubt as to where Lenny Trawick stands on that.

During Trawick’s career, he has won several awards for blues songwriting at the MOVA Festival in Guntersville. He also won the Troy Arts Council’s Professional Music Award in 2016.

Trawick, Jim Carr, Ed Esposito and Lamar Millar will kick of Saturday’s events at 2 p.m. at the Wiregrass Museum of Art located behind the Dothan Civic Center. The finale of the Wiregrass Blues Festival will begin at 9:30 p.m. with a jam session by all performers.

Tickets will be available at the gate.