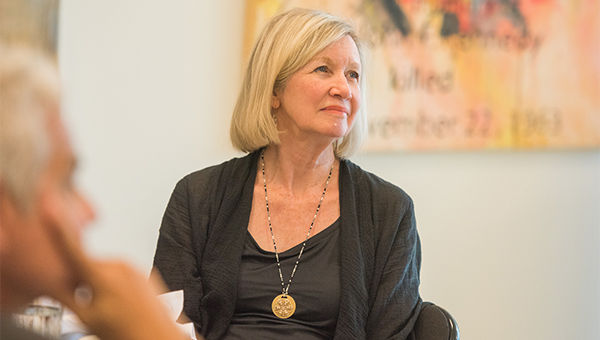 Messenger photos/Jonah Enfinger
Troy University honored Cassandra King Friday with the 2017 Hall-Waters prize for her contibutions to Southern culture through her writings. King grew up near Pinckard, Alabama and has written five novels. Inset, from left: George Swem, King and Dr. Kirk Curnutt.

Troy University honored Cassandra King on Friday with the 2017 Hall-Waters prize for her “contribution to Southern culture” through her writing.

“I’m deeply honored,” King said upon receiving the award. “I can’t even begin to tell you. It’s great when you receive honor from your home folks.”

King said she was especially honored to win the award after her husband Pat King was awarded the honor two years ago. He passed away last March.

“When he passed, the world lost a great writer; but for me, I lost the love of my life,” King said.

King said the year since her husband’s death has been a difficult but transforming force in her life.

Dr. Kirk Curnutt, head of the selection committee for the award, said the committee selected King because she was too often pigeon-holed into the “pejorative” category of “women’s literature.”

“Her work is often too unceremoniously put in the category of women’s literature,” Curnutt said. “Not only does King paint a beautiful portrayal of Southern life, but a beautiful and intimate look into the lives of women.”

“Place, character and history,” Givhan said. “These are the driving features of Southern literature and they thrive in the hands of King.”

King said she is fascinated by the quirks of Southern people, but it hasn’t always been that way.

“I always wanted to be a writer,” King said. “But I always wanted to get out of the sticks. I wanted to go to New York City or Paris. I didn’t appreciate my heritage then. It took me years to realize the most authentic writing comes from our own backyard.”

King told the group that crowded the International Arts Center Friday of how People magazine once ran an article that said she “overdoes” southern quirkiness.

“They just don’t know,” King said. “I have to play down Southern quirkiness. If I didn’t, nobody would believe it. You just can’t make this stuff up.”

The Hall-Waters Prize was endowed by the late TROY alumnus Dr. Wade Hall, an author, former member of the faculty at the University of Florida and professor emeritus of English at Bellarmine University in Louisville, Kentucky. Dr. Hall, a native of Bullock County, endowed the prize as a memorial to his parents, Wade Hall Sr. and Sarah Elizabeth Waters Hall. The award is presented regularly to a person who has made significant contributions to Southern heritage and culture in history, literature or the arts.