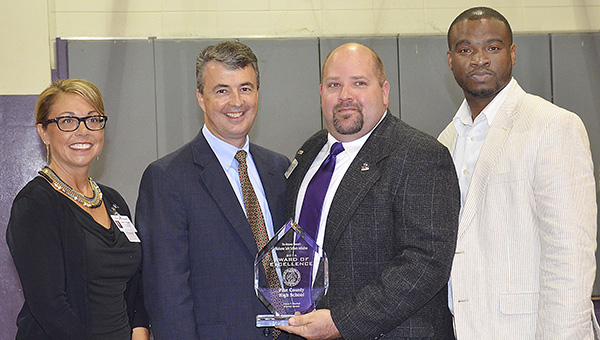 Nine schools were selected as winners from seven Alabama State School Board of Education districts and private schools for two regions of the state.

Marshall said he was pleased to carry forward an important tradition of the Attorney General’s Office to recognize schools throughout Alabama for dedication and excellence in keeping students safe.

“Each day that parents leave their children at school, they are entrusting what they hold most precious into the care of schoolteachers, principals and other staff,” Marshall said. “With these awards, we honor those who have achieved particularly high standards and set examples that others may follow. We are grateful for their service and commitment to protecting the children of Alabama.”

Marshall congratulated Pike County High School as one of the winning schools in Alabama for 2016.

“We don’t give these awards away,” he said. “Pike County High School has earned this Award of Excellence. The ones sitting on the bleachers – the students – have won this award by standing up for what is right and by doing the right thing.”

“I would like to give credit to Mr. Oliver for his hard work and dedication to ensuring our school safety plan is up-to-date and readily available to all stakeholders,” Wright said. “I would like to thank him and Ms. Whitaker for the time and effort they put into applying for the Attorney General’s Safe School Award of Excellence. Our faculty and staff believe in providing our students with a safe learning environment. I am proud that Pike County High is being recognized for our team effort.”

Whitaker said the Safe School Award of Excellence was a collaborative effort in fulfilling PCHS’ promise of excellence in education.

She credited Oliver with the administration of the in-school safety program and his ability to bring people and agencies together that are dedicated to making PCHS a safe place for the education of students.

Oliver said April 20 marked 18 years since the Columbine High School shooting, a day that changed the landscape of school safety in America. He acknowledged the attorney general’s dedication to and efforts directed toward keeping Alabama schools safe and secure places for learning and his commitment that “Columbine not be replicated.”

Dr. Mark Bazzell, superintendent of Pike County Schools, expressed appreciation to Marshall for the recognition for Pike County High School and to the administration, staff and students for their efforts in creating a culture of excellence in the classroom and as contributing citizens as well.

He acknowledged the collaborative efforts of the school, the community and the agencies to provide a safe learning environment for the students.