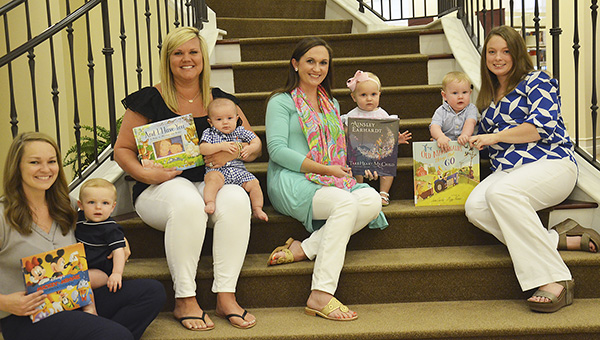 The Troy Junior Women’s League honored the babies born to league member during the year 2016 by donating books to the Troy Public Library in the children’s names.

Five babies were honored Tuesday as Teresa Colvin, TPL children’s librarian, presented the selected books to the babies and their moms for the first reading of “their” books.

“‘Books for Babies’ is an annual project for the Troy Junior Women’s League,” Colvin said. “By donating children’s books to our library, these young women are recognizing the importance of reading at a young and they are also supporting our library.”

Colvin said the books are selected based on each child’s personality and interest.

“Even at an early age, children show their preference for many different things,” she said. “Some children show interest in animals, some in trains and trucks and some in stuffed toys, just so many things

“Each child’s name will be printed inside his or her book so, when they get older, they can come to the library and read ‘their’ books.”

The book presented to the TPL in name of nine-month-old Braxton Ross, the son of Scott and Crystal Ross, was titled, “Old Mac Donald’s Things That Go.”

“We can all guess what Braxton likes,” Colvin said, with a smile.

Reeves Fiveash, who is also nine months old, was honored with “Disney’s Mickey and Minnie Storybook Collection.” Reeves is the son of David and Holly Fiveash.

“Reeves probably likes a lot of Walt Disney characters and so do many of the children who visit the TPL,” Colvin said.

“And I Have You” is the book that was selected for Hudson Raiti, who is four months old. Parents Matt and Amanda Raiti are proud to have little Hudson in their lives.

“And we are proud to welcome him and his friends as new members of our children’s library,” Colvin said.

Anise Johnston, the 13-month-old daughter of Lawrence and Ashley Johnston, was honored with “ Take Heart My Child” which is a favorite book of children and parents alike, Colvin said.

“Today, I’ll be a Princess” was the book selection for Charlotte Crawley. Charlotte and her mom were unable attend the book presentations. She is the daughter of Tommy and Lauren Crawley.

Colvin expressed appreciation to the Troy Junior Women’s League for its continuing support of literacy and the TPL.