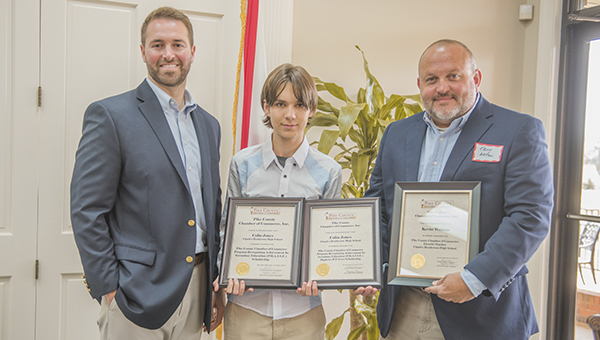 Six local students were awarded scholarships Wednesday for excellence in academics. CHHS student Colin Jones, pictured above, won the big scholarship for scoring the higher on the ACT than any other Pike County student. To his left is CHHS principal Brock Kelley and to his right is CHHS history teacher Kevin Watson.

Jones was just one of the local students awarded Wednesday at the 2017 P.R.A.I.S.E. (Program Recognizing Achievement in Secondary Education) Banquet held by the Pike County Chamber of Commerce Education Committee.

In addition to the P.R.A.I.S.E. Scholarship awards for the highest ACT scores, the committee also awarded two scholarships in honor of former longtime committee members Hank Jones and Betty Wagoner.

Chamber President Kathy Sauer explained the importance of good students to a community like Pike County.

“I tell students ’You are our best recruiters’,” Sauer said. “People looking to bring their families look at the school system because their kids will be going into that school system.”

Winners of the P.R.A.I.S.E. scholarships for highest ACT score also recognized their favorite teachers Wednesday. Jones honored CHHS history teacher Kevin Watson, who he said challenged him and made him love history.

Hughes recognized Goshen teacher Renee Cortner as her favorite for challenging her and helping her in the field of English.

Byars said PLAS teacher Alissa Jordan, his teacher in chemistry and robotics classes, is his favorite for treating students as equals.