The visiting Brantley Bulldogs rallied for six runs in the last three innings to claim a 7-3 win over Charles Henderson High Tuesday on Senior Night for the Trojans at Hogan’s Hole.

CHHS held a 3-1 lead after two innings, but Brantley picked up three runs in the fifth, two in the sixth and one in the seventh for the victory.

The Trojans, ending their regular season at 16-11, were handcuffed at the plate by Brantley pitchers Tommy Spivey and Jacob Free who held CHHS to only eight hits over seven innings. 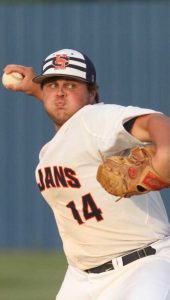 Messenger Photo/dan smith
Charlie Tisdale of CHHS pitches against Brantley Tuesday. Tisdale and the Trojans fell to the Bulldogs 7-3.

Brantley took a 1-0 lead when Grayson Layton walked and scored in the top of the first inning, but CHHS answered in the bottom of the second inning for three runs when seniors Jabronski Williams and Carson Tucker hit back-to-back singles, both scored on a double by senior Devan Suddith, who later scored a wild pitch for a 3-1 lead.

Free was hit by a pitch to lead off the fifth for Brantley, Nathan Renfroe doubled, Mack Wise singled and the Bulldogs took a 4-3 lead on a single by Caleb Odom.

Spivey led off the top of the sixth with a single, Free doubled to drive in a run and Wise singled to put Brantley up 6-3.

Edge Branum singled and scored on another base hit by Layton in the top of the seventh for the 7-3 advantage.

Tucker and Suddith each had two hits for CHHS, while Hunter Reeves, Bryson Gandy, Jackson Murphy and Jabronski WIlliams had one base hit apiece.

Brantley collected 14 hits on the day with Layton, Free, Renfroe, Wise, Odom and Branum getting two hits each.

The Trojans are off until Friday when they host Dallas County in the first round of the Class 5A state playoffs, while Brantley, 18-11 and ranked No. 8 in the state in Class 1A, will host Victory Christian.