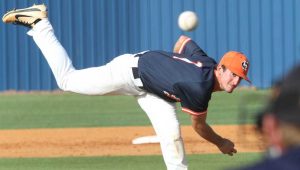 New Brockton High came to Troy with every intention of winning Monday’s matchup with Charles Henderson High, and entering the contest with a 16-3 record and a No. 5 ranking in Class 2A, they gave the Trojans all they wanted in a 9-6 CHHS victory.

The Trojans, improving to 16-10 on the year, got a solid pitching performance from senior right-hander Grant Hughes, who allowed three runs on six hits over six innings, while Garrett Tucker closed out the top of the seventh.

The Gamecocks picked up single runs in the second and fourth innings to cut the lead to 5-2, with the Trojans getting one back in the bottom of the fourth when Charlie Tisdale singled and scored on a single by Murphy to extend the lead to 6-2.

New Brockton added another run in the top of the fifth, but Carson Tucker singled to lead off the bottom of the fifth and scored on a single by Devan Suddith. Lowery later doubled, and Tisdale blasted an opposite-field home run for the 9-3 lead.

The Gamecocks added three more runs in the top of the seventh inning before Garrett Tucker struck out the last batter to end the game and secure the 9-6 CHHS win.

CHHS was led at the plate by Tisdale with three hits, Gandy and Carson Tucker had two hits each, while Reeves, Williams, Murphy, Suddith, Wilkes and Lowery had one hit apiece.

The Trojans are at home again Tuesday evening for Senior Night when Brantley comes to town, which will also conclude the regular season.

CHHS will host Dallas County, 13-4, this Friday in the first round of the Class 5A playoffs for a double-header. A third game, if necessary, will be played Saturday at 1 p.m.