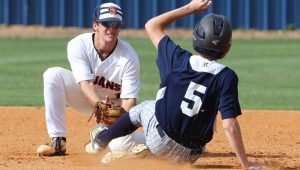 Photo/Dan Smith
CHHS shortstop Grant Hughes applies the tag on a Jemison baserunner Friday at Hogan’s Hole in a 12-2 win. Inset: Graham Wilkes of CHHS allowed no earned runs and struck out four in the Trojans 4-2 win in the second game of the double header

Hunter Reeves and Graham Wilkes each earned complete-game victories on the mound as Charles Henderson High swept Jemison Friday by scores of 12-2 and 4-2 at Hogan’s Hole on the campus of CHHS.

The Trojans, improving to 15-10 on the year, have regular season games remaining this upcoming Monday and Tuesday at home before hosting the first round of the Class 5A state playoffs later in the week.

Reeves had a no-hitter working after three complete innings for the Trojans before Jemison broke the ice in the fourth. The senior righty allowed no earned runs on five hits while striking out five.

Jabronski Williams was 4-for-4 in the first game while Bryson Gandy had three hits, Charlie Tisdale had two hits. Reeves, Jackson Murphy, Devan Suddith and Grant Hughes had one hit each.

Williams singled in the first inning and later scored on a fielder’s choice put in play by Murphy.

Murphy and Reeves each blasted three-run homers for the Trojans in a nine-run third inning. Murphy also collected four RBI in the first game while Reeves had three runs batted in.

Reeves walked to lead off the third, Williams singled, Murphy homered, followed by a single by Gandy, a walk by Carson Tucker and a two-RBI single by Suddith. Tisdale hit a two-out single and Reeves homered in the big inning.

Tisdale and Hughes singled in the fifth inning and scored on a two-RBI base hit by WIlliams.

In the nightcap Jemison took advantage of some untimely CHHS errors for a 2-0 lead after two innings, but the Trojans rallied in the bottom of the third to go ahead 3-2.

Hughes reached on a Jemison error, Reeves walked and Williams tripled to drive in both runners. Murphy then singled to put CHHS ahead 3-2.

Suddith singled to lead off the bottom of the sixth, stole second and later scored on a wild pitch for the 4-2 advantage.

Wilkes was strong on the mound for the Trojans, allowing no earned runs on four hits over seven innings, striking out four and walking none.

Murphy and Suddith each had two hits in the second game while Reeves and Williams had one hit apiece.

The Trojans are at home Monday night against New Brockton and will host Brantley Tuesday evening for Senior Night.