Fingerprinting for a good cause 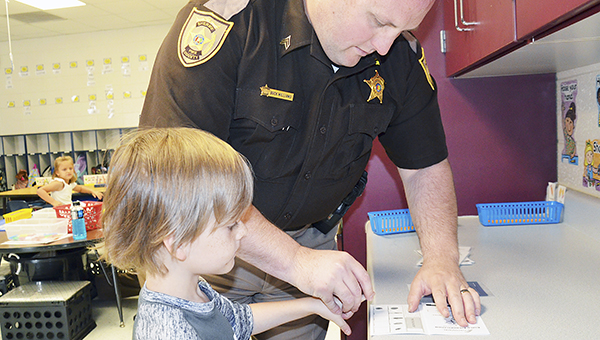 For 17 years, the Pike County Sheriff’s Department has been fingerprinting kindergarten students throughout the county so vital information will be available to authorities in the event a child is lost or goes missing.

The Child ID program was initiated by Pike County Sheriff Russell Thomas as a safeguard for parents and children throughout the county.

Williams and Corrections Officers Dakota Anderson and  Joniece Johnson dedicated the last several days to the fingerprinting of all kindergarten students in Pike County.

The officers were at Banks, Goshen and Pike County early in the week and at the Hank Jones Early Childhood Center in Troy on Thursday.

“We fingerprint around 500 kindergarten students each year, so over the years we’ve fingerprinted nearly 9,000 young kids,” Williams said. “We hope that nothing bad ever happens to any one of them but children do get lost and people go missing. Fingerprinting is a safeguard in case something bad does happen.”

The fingerprints are taken on an identification card that is sent home to the parents or guardians.

“It’s also good to include any allergies or medical conditions a child might have,” he said. “A sample of a child’s DNA may be included with a hair sample. Any of this information can be helpful when a child is missing for any reason. It could assist with a child being found or lead to the identification of a child.”

Williams said child abduction is something that is most often read about or heard on television.

“Hopefully, it will never happen here but, if it does, we want to have all of the resources available to us to find that child,” he said. “This card would give us information vital to the search.”

The Pike County Sheriff’s Department has done its part in fingerprinting the kindergarten children. Parents are encouraged to complete the card with other information that would be vital in a search if a child goes missing.