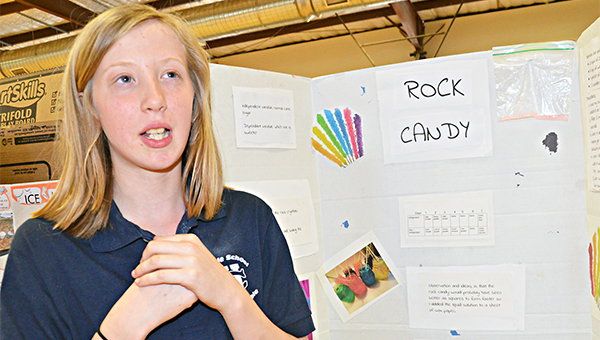 If you want your potted plants to grow faster, give them an aspirin.

The gymnasium at Charles Henderson Middle School was a-buzz with excitement Monday as 53students in Amanda Challancin’s eighth-grade advanced science class presented their Science Fair projects to their classmates and to their fellow students.

Challancin congratulated the winners and all of the students for their hard work and dedication to their projects.

“Students learn more from this one project and remember it longer than most anything I could teach them in the classroom,” Challancin said. “This is a major science project in which the students learn about a specific scientific concept while learning organizational, research and social skills. These science fair projects give the students valuable hands-on learning experience.”

The CHMS Science Fair is different from many science fairs in that it’s interactive, Challancin said.

The students give one-minute presentations to the other classes that visit the science fair. They also give a presentation to their teacher and for a grade.

The students are required to do a controlled experiment and follow the procedures of the scientific method. They state a hypothesis and explain how they tested their hypothesis with an experiment and display the results in the form of a table, chart or graph.

Victoria Stephens drew puzzled looks for other students with her experiment “How Pure is Your H2O?

“I tested several different brands of bottled water and I learned that water from the faucet is actually cleaner than any of the brands I tested,” she said.

Milton Armstrong also was interested in drinking water. However, he wanted to know what kind of drinking vessel kept the water cool longer.

“I put water of the same temperature in four different containers – a plastic cup, a glass container, a paper cup and a Styrofoam cup – for the same amount of time,” he said. “The water in the Styrofoam stayed much cooler because it contains polystyrene and the others don’t. The water in the glass got warm faster.”

“I want them to be recognized as well as the students,” she said.

“I’m very appreciative that I can do this for my students.”