Car owners proud to ‘show off’ at library show 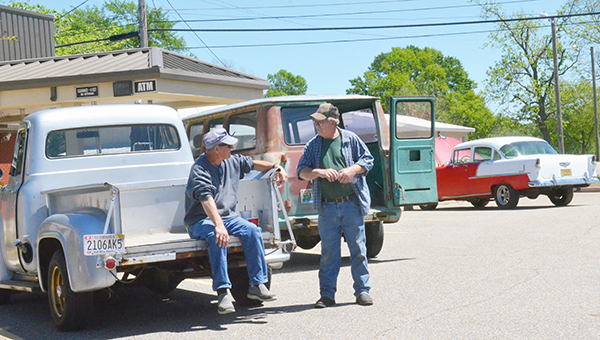 Dolly Parton might have had a coat of many colors but Bruce Unbehagen can boast of having a car of many parts.

Unbehagen’s  “made vehicle” was among the show cars that attracted a lot of attention at the Show Off Car and Truck Show sponsored by the Tupper Lightfoot Memorial Library in Brundidge Saturday. The Show Off show was held in celebration of National Library Week and in partnership with the Brundidge Nutrition Center’s Easter egg hunt and family day.

While the children were busy hunting candy-filled eggs on the grounds of the public library and playing games with their parents and grandparents, the Show Off Car and Truck Show, in the First National Bank parking lot, was the gathering place for vehicle enthusiasts. At first glance, Umbehagen’s vehicle looked like a soaped-up hot rod. Another view gave the appearance of a Model T and, from the back the truck looked like a moonshine runner. “It’s a made vehicle,” Umbehagen said, with a smile. “It’s made out of a lot of different parts. The cab’s from a ’37 Ford. The grill’s from a ’38 and the headlights or eyeballs are from a ’36. Another part of the vehicle was from a Desoto and the fuel tank was a beer keg. Each part has a story and Unbehagen was more than willing to tell the stories.

“I enjoy talking with people about the car and they seem to be interested,” he said. “I enjoyed seeing the other vehicles and hearing about them. Car shows interest me.”

Lenny Trawick was showing off his van, which is a work in progress. He didn’t make any promises that it would be a real show-off vehicle at next year’s show, only “we’ll see.” His son’s pickup truck was also in the show and attracted the attention of a lot of young men who would like to have one “just like it.”

Theresa Trawick, Tupper Lightfoot Memorial Library director, said the Show Off Car and Truck Show was successful in the enjoyment it brought to those who attended.

“They had a good time looking at the vehicle and having the opportunity to actually touch them,” she said. “At most shows, you are not allowed to touch the vehicles, so that opportunity was rather unique to ours.”

“We have enough vintage cars and trucks around the Brundidge area to have a very interesting show,” she said. “Hopefully, more people will participate if we do the show again.

“The Easter egg hunt was a lot of fun for the children. Wanda Vinson, center director, and the participants and the Robert E. Barr Nutrition Center did an outstanding job planning and conducting the hunt and the games for the children and adults. It was an inter-generational event and   everyone enjoyed it. We thank all of those who made the celebration of National Library Week a success.”