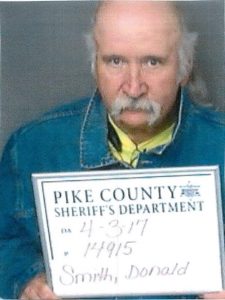 Lt. Troy Johnson of the Pike County Sheriff’s Office said the charges are based on allegations that Smith, 58, had sexual contact with two minors between the ages of 16 and 18.

Johnson said the abuse allegedly occurred multiple times over the course of the past year.

The code of Alabama states in section 13A-6-67 that a “person commits the crime of sexual abuse in the second degree if:

“(1) He subjects another person to sexual contact who is incapable of consent by reason of some factor other than being less than 16 years old; or

“(2) He, being 19 years old or older, subjects another person to sexual contact who is less than 16 years old, but more than 12 years old.”

Johnson said Smith was charged under subsection 1 because the victims were 16 or older.

Both counts are Class A misdemeanors, but county prosecutor Jon Folmar said one count could be upgraded if evidence shows one incident happened subsequently to the other.

Folmar said the charges could also be upgraded to first-degree offenses if evidence showed the use of force.

Smith is considered innocent until proven guilty in a court of law. Smith was booked into the Pike County Jail on Monday and released on $2,000 bond.